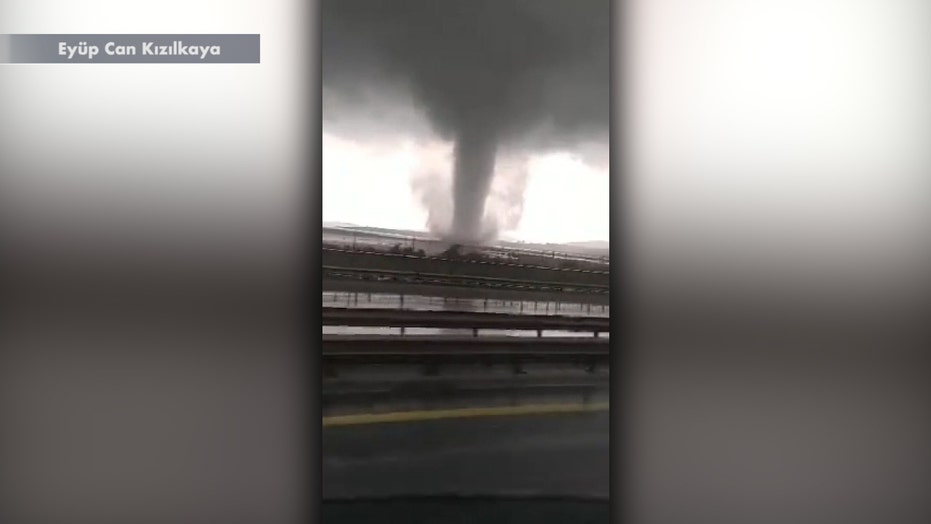 Raw video: Waterspout travels across Lake Buyukcekmece in Istanbul as torrential rain hit the city causing at least one death in flash floods.

A large waterspout could be seen over a lake in Turkey as heavy rain and hail storms lashed Istanbul Tuesday, flooding streets and causing at least one death.

Major flash flooding was reported in Esenyurt, a neighborhood nestled on the European side of Istanbul where a stream burst its banks.

Istanbul Gov. Ali Yerlikaya told local media a Syrian refugee was killed while six people were hurt in floods in the low-income neighborhood.

THIS WAS THE DEADLIEST TORNADO IN THE HISTORY OF THE WORLD

The storms also generated a waterspout over Lake Buyukcekmece, a large lake on the edge of the city.

A large waterspout was seen moving across Istanbul’s Lake Buyukcekmece on Tuesday as torrential rain hit the city. (Eyüp Can Kızılkaya via Storyful)

Footage filmed by area resident Eyup Can Kızılkaya shows the waterspout moving over the lake.

According to the National Weather Service (NWS), waterspouts are tornadoes that occur over water.

They tend to either be tornadic waterspouts -- ones that begin as true tornadoes over land and move over water -- or fair-weather waterspouts that form over open water and are small and less dangerous.

"Waterspouts are most common over tropical or subtropical waters," the NWS states.

Those injured in the storms Tuesday included three children, Syrian refugees aged 2, 3 and 5, who were rescued from a basement apartment, the Istanbul governor’s office said. The children were hospitalized, but were not in any serious condition.

The private DHA news agency showed firefighters breaking through another basement window in Esenyurt as floodwaters inundated the area.

At least five other districts also were affected by the storm, the governor’s office said.

On Monday, flash floods caused by torrential rains hit the town of Kestel, in nearby Bursa province, killing five people. A sixth person is missing.