Volcanic ash closes airports as it winds down to North Africa, swirls over Spain and Turkey 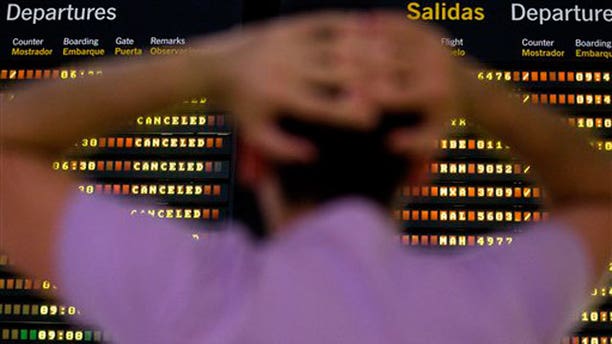 May 11: A passenger looks at a flight departure screen showing all flights canceled at the international airport in Seville, Spain. (AP)

RABAT, Morocco (AP) — Volcanic ash from Iceland wound its way south down to North Africa and curled over to Turkey on Tuesday, forcing authorities for the first time to shut down airports in Morocco, as well as airports in Spain and airspace over Turkey.

Eight airports in Morocco — among them Casablanca, Rabat-Sale, Tangiers, Tetouan, Agadir and Essaouira — were closed early Tuesday afternoon and could open by 7 p.m. (1800 GMT) "to guarantee a maximum level of security for passengers," the Moroccan civil aviation authorities and the transport ministry said.

Airports in Morocco, some 3,780 kilometers (2,350 miles) from Iceland, were not affected last month when the April 14 eruption of the Eyjafjallajokul (pronounced ay-yah-FYAH-lah-yer-kuhl) volcano forced at least a five-day suspension of air traffic in Europe. This time, the ash pushed south, forcing even the small airport in the Moroccan town of Tan-Tan, just north of the Western Sahara territory, to close.

The ash also was causing havoc Tuesday in nearby Spain, forcing airports to shut down in the Canary islands of Tenerife, La Palma and La Gomera, affecting dozens of tourist flights. On the Spanish mainland, 1,300 kilometers (800 miles) from the Canary islands, airports at Seville and Jerez in the south and Badajoz in the east were closed.

Spain also kept restrictions on planes flying between 20,000 feet and 35,000 feet (6,100 meters and 10,770 meters) above the ground, mainly affecting trans-Atlantic flights to and from other European countries. Up to 20 Spanish airports, including international hub at Barcelona, had to close over the weekend because of the ash.

Istanbul's two airports remained open, but international flights from Europe were likely to be affected by the airspace suspension.

Elsewhere, the dense ash in the middle of the North Atlantic — which caused severe flight disruptions over the weekend — was dispersing, easing the need to reroute trans-Atlantic flights around it and cutting down on delays, the Eurocontrol air traffic control agency reported.

Approximately 29,000 flights were operating Tuesday in Europe, about normal for this time of year, according to the Brussels-based agency.

Meteorologists say until the volcano in southern Iceland stops erupting, aviation in Europe will be heavily affected by how prevailing winds distribute the ash. The last time the same volcano erupted, the action went on from 1821 to 1823.

AP reporters Slobodan Lekic from Brussels, Ciaran Giles from Madrid and Selcan Hacaoglu in Anakara, Turkey contributed to this report.