Venice flooding has city 'on its knees,' Italy declares state of emergency

The worst flooding to strike Venice in more than 50 years spurred officials in Italy to declare a state of emergency Thursday after water levels that topped 6 feet inundated the city.

Water levels reached 6.14 feet late Tuesday, the second-highest level ever recorded in the city and just 2 1/2 inches lower than the historic 1966 flood. It was followed by another high tide on Wednesday that caused widespread flooding and power outages.

"The disaster that hit Venice is a blow to the heart of our country," Italian Prime Minister Giuseppe Conte said in a Facebook post. "It hurts to see the city so damaged, its artistic heritage compromised, its business activities on its knees."

Conte's cabinet approved a decree Thursday afternoon to declare Venice to be in a state of emergency, freeing up financial aid to pay for emergency spending and restore services. The decree includes $21.7 million in immediate financial aid aimed at helping the city recover. Venice's mayor has said the damage is estimated to be in the "hundreds of millions of euros." 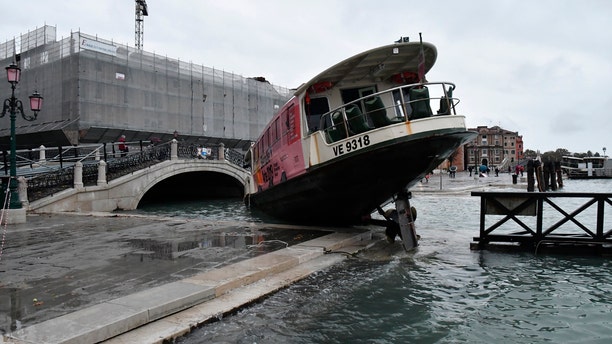 A stranded ferry boat lies on its side, in Venice, Wednesday, Nov. 13, 2019. (AP Photo/Luigi Costantini)

In Venice, the crypt beneath St. Mark’s Basilica was inundated for only the second time in its history. Damage was also reported at the Ca’ Pesaro modern art gallery, where a short circuit set off a fire, and at La Fenice theater, where authorities turned off electricity as a precaution after the control room was flooded. 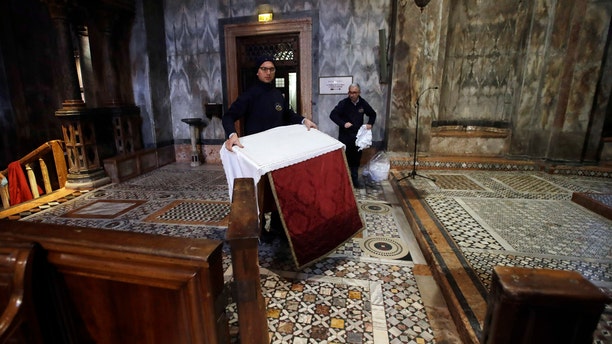 Italy’s culture minister, Dario Franceschini, said no damage had been reported to art collections in museums throughout the city but many sites still remained closed to tourists, and La Fenice canceled concerts Wednesday and Thursday evening. Damage throughout the city included five ferries that serve as water buses that were left strewn on walkways and near bridges of the city's canals.

Tourists were forced to drag their suitcases through flooded areas such as St. Mark's Square after officials removed walkways to prevent them from drifting away. Wooden boards that shop and hotel owners have placed on doors in previous floods couldn’t hold back the water. 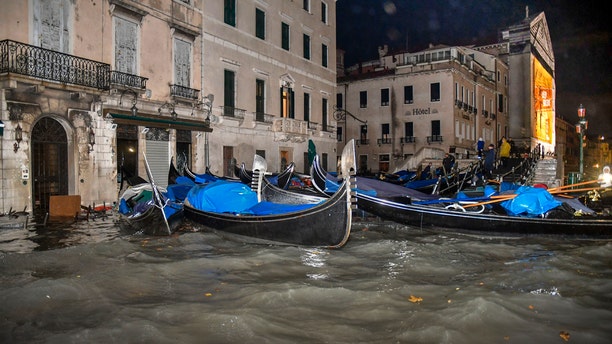 Two deaths have been blamed on the flooding on the barrier island of Pellestrina. A man in his 70s was apparently electrocuted when he tried to start a pump in his dwelling, according to Danny Carrella, an official on the island of 3,500 inhabitants. A second person was also found dead, the BBC reported. 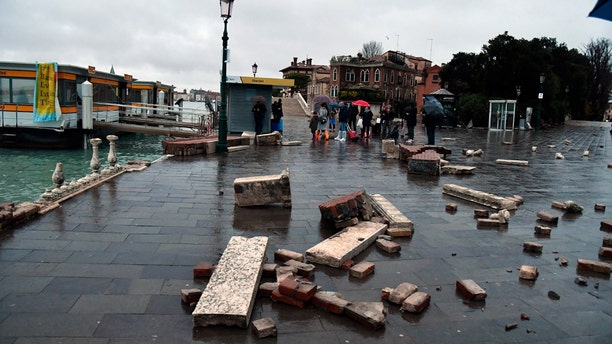 The flooding this week was caused by southerly winds that pushed a high tide, exacerbated by a full moon, into the city built amid a system of canals that is particularly vulnerable to any sea-level rise. The sea level in Venice is 4 inches higher than it was 50 years ago, according to the city’s tide office.

“Venice is on its knees," Venice Mayor Luigi Brugnaro said on Twitter. “St. Mark’s Basilica has sustained serious damage, like the entire city and its islands.”

Brugnaro, who blamed climate change for the “dramatic situation," called for speedy completion of a long-delayed project to construct offshore barriers. The moveable undersea barriers called "Moses" are meant to limit flooding.

The project, which has been opposed by environmentalists concerned about damaging the delicate lagoon ecosystem, has been delayed by cost overruns and corruption scandals, with no launch date in sight. 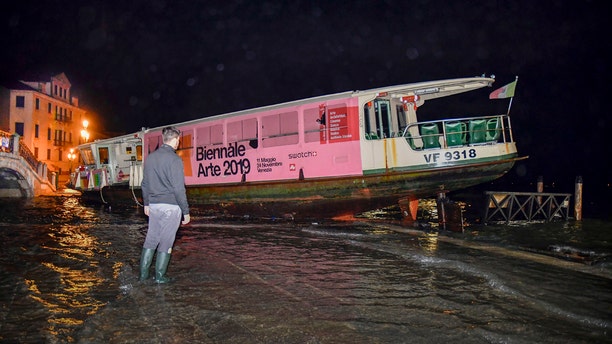 Luca Zaia, governor of the Veneto region, told SkyTG24 that the barriers were almost complete, but it wasn’t clear if they would work against such flooding.

“Despite 5 billion euros under water, St. Mark’s Square certainly wouldn’t be secure,’’ Zaia said, referring to one of Venice’s lowest points, which floods when there is an inundation of 80 centimeters (2.6 feet).

Italy's prime minister on Thursday said that the "commitment to Venice is total" regarding the flood barrier system.

"The situation in this unique city is dramatic," he told Italian news agency ANSA. "Lots of money has been spent." 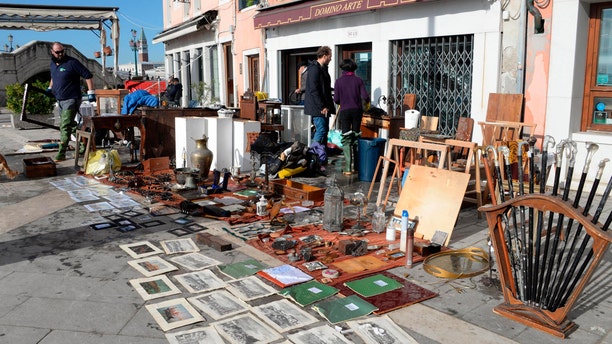 Sketches and drawings are lined up to dry up outside an art store following a flooding in Venice, Italy, Thursday, Nov. 14, 2019. (Andrea Merola/ANSA via AP)

Italian Infrastructure Minister Paola De Micheli told Radio Capital that the aim was to complete the project by the end of 2021.

"I hope that it is partially in use before then," he said Thursday.