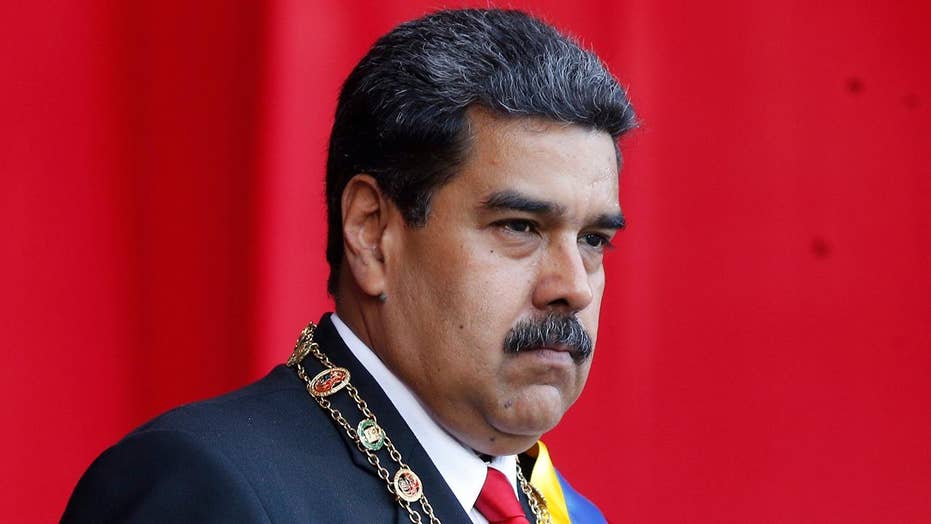 Venezuela President Nicolas Maduro began his second term in office on Thursday despite heightened international calls for him to step down, a worsening economic crisis fueling a humanitarian emergency and the mass exodus of millions of citizens seeking to escape hardship.

The former bus driver turned socialist leader was sworn in during a ceremony filled with cheering supporters waving miniature Venezuela flags – a sharp contrast to the harsh realities that face the country’s citizens.

“I swear on the legacy of Hugo Chavez ... that I will meet all of my duties under the constitution,” Maduro said, during the ceremony presided over by Supreme Court Chief Justice Maikel Moreno.

Maduro's second term extends Venezuela's socialist revolution amid widespread complaints that he has stripped Venezuela of its last vestiges of democracy.

Maduro denies that he's a dictator and often blames President Donald Trump for leading an economic war against Venezuela that's destroying the country.

"Not before, not now, nor will there ever be a dictatorship in Venezuela," Maduro said in a Wednesday news conference.

He shrugged off an international outcry that his reelection at the widely boycotted 2018 election was illegitimate and a farce. Maduro won re-election last year despite hyperinflation, chronic food shortages, and a severe economic crisis.

A coalition of a dozen Latin American governments and Canada have rejected the legitimacy of Maduro's next term, and the U.S. has sanctioned top officials in his government.

“The U.S. will not recognize the Maduro dictatorship’s illegitimate inauguration,” John Bolton, U.S. National Security Advisor, said in a tweet Thursday. “We will continue to increase pressure on the corrupt regime, support the democratic National Assembly, and call for democracy and freedom in Venezuela.”

The U.S. has been mulling designating Venezuela a state sponsor of terrorism alongside Iran, North Korea, Syria, and Sudan, Fox News reported earlier this month.

However, Cuba's President Miguel Diaz-Canel, Bolivian President Evo Morales and President Anatoli Bibilov of a breakaway province of Georgia were among the foreign leaders who attended Maduro's swearing-in ceremony at the country's Supreme Court.

What happens when you die in Venezuela?

Maduro said 94 countries had sent representatives to the inauguration.

Venezuela's splintered opposition movement has failed to counter the socialist party's dominance. Maduro's government has jailed or driven into exile its most popular leaders.

“To the few representatives of governments that are in the country: look at the regime’s economic, social and political indicators,” wrote opposition leader Henrique Capriles via Twitter. “Maduro is illegitimate because there have not been free elections, and he’s also illegitimate in his performance.”

The number of Venezuelans fleeing is expected to reach 5.3 million by the end of 2019, according to the United Nations, “in what has become the largest exodus in modern Latin American history.”

The U.N High Commissioner for Refugees stated that humanitarian organizations will require $738 million to provide vital services such as food and shelters to help ease the burden on receiving nations.

And while Maduro's popularity has plunged amid scarcities, hyperinflation and rising authoritarianism that have sparked the mass emigration, supporters who receive government subsidies in shantytowns continue to back the man who took over for the late Hugo Chavez.

"It's not the president's fault," said Frances Velazquez, a 43-year-old mother of two who survives on government-subsidized boxes of rice, flour and cooking oil. Velazquez blamed opportunists who drive up the prices on scarce items making life difficult for families like hers.

Maduro’s first agenda item for his second term is a ceremony at Venezuela’s military academy, a telling symbol of the importance of the armed forces, Reuters reported.