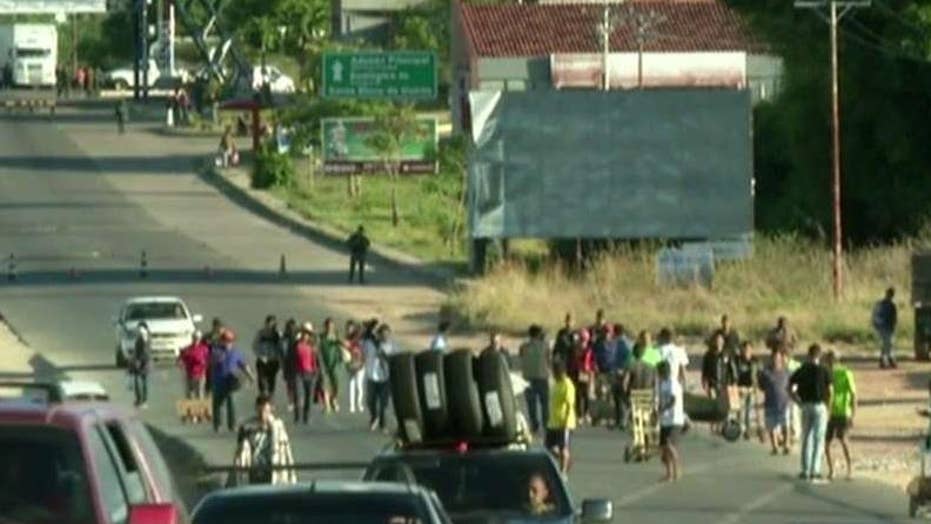 The standoff for humanitarian aid for Venezuela turned deadly Friday when a woman of an indigenous group was killed and another dozen injured after clashes with security forces at a border town with Brazil.

The victim was identified as Zoraida Rodriguez, a member of the Pemon ethnic group that clashed with the Venezuela National Guard and army, who were moving tanks near the border town of Gran Sabana, Mayor Emiliano Gonzalez said.

Gonzalez said that while soldiers fired rubber bullets and tear gas, Rodriguez was shot dead during the clashes. The injured people were taken for medical treatment.

There was no immediate information on the condition of the injured, though television news showed images of three men on gurneys being treated for bloody wounds.

US readies humanitarian aid for Venezuela

Venezuela's opposition leader Juan Guaido is trying to get millions of dollars in humanitarian aid into his country despite a blockade from disputed President Nicolas Maduro; State Department correspondent Rich Edson reports.

The violence came a day after embattled President Nicolas Maduro ordered the border with Brazil closed to prevent aid from neighboring countries to enter Venezuela. He also blocked air and sea travel between Venezuela and the nearby Dutch Caribbean island of Curacao, where the first cargo of relief supplies arrived earlier that day.

Maduro denies any humanitarian crisis exists, and the plan to bring in aid is one of the most ambitious — and potentially dangerous — the opposition has attempted since opposition leader Juan Guaido declared himself interim president in January.

"We're not beggars," he said. "What the U.S. empire is doing with its puppets is an internal provocation. They wanted to generate a great national commotion, but they didn't achieve it."

US SAYS IT WILL DELIVER AID BLOCKED BY VENEZUELA, SETTING UP CONFRONTATION WITH MADURO REGIME

The deadly clashes were not the only to turn violent in Venezuela over humanitarian aid.

Lawmaker members of the Venezuelan National Assembly and supporters of the Venezuelan opposition leader Juan Guaido, who many nations have recognized as the country's rightful interim ruler, clash with security forces as they block the road on the outskirts of Mariara, Venezuela February 21, 2019. REUTERS/Andres Martinez Casares - RC1F72808AB0

Trucks driven by Guaido supporters nearly rammed into a blockade by security forces in an attempt to reach aid in Colombia.

Images showed a red truck trying to forcefully pass through a checkpoint in Mariara, in northern Venezuela a few hours outside of Caracas, on Thursday as the security forces appeared to stand their ground.

Lawmaker members of the Venezuelan National Assembly and supporters of the Venezuelan opposition leader Juan Guaido, who many nations have recognized as the country's rightful interim ruler, clash with security forces as they block the road on the outskirts of Mariara, Venezuela February 21, 2019. REUTERS/Andres Martinez Casares - RC18C9C08980

The national guardsmen in anti-riot gear positioned a trailer truck in front of a tunnel, blocking the highway westward. A shouting match and scuffle ensured, with the guardsmen firing tear cag before the lawmakers eventually forced their way through and resumed their journey.

The truck is part of a cross-country caravan led by Guiado for the border with Colombia, where much of the U.S.-supplied aid is warehoused. Guaido has called for thousands of ordinary Venezuelans to assemble at the Colombian border on Saturday to help bring the aid across.

Will Maduro use military force to stop US aid from coming into Venezuela?

Meanwhile, dueling concerts began on the country's western border with Colombia, where much of the U.S.-supplied aid is being stored in a warehouse.

British billionaire and adventurer Richard Branson is sponsoring a Live Aid-style concert featuring dozens of musicians including Latin rock star Juanes on one side of a crossing that Colombian officials have renamed the "Unity Bridge," while Maduro's socialist government is promising a three-day festival deemed "Hands Off Venezuela" on the other.

A child holds a Venezuelan flag during the Venezuela Aid Live concert on the Colombian side of Tienditas International Bridge on the outskirts of Cucuta, Colombia, on the border with Venezuela, Friday, Feb. 22, 2019. (AP Photo/Fernando Vergara)

The Trump administration said it's sent nearly 200 metric tons of humanitarian assistance over the past two weeks to the Colombian-Venezuelan border for distribution inside Venezuela.

The U.S. Agency for International Development said Friday that about 191 tons of relief supplies have been delivered to a depot in Cucuta, Colombia since Feb. 4. That includes food for 2,000 people for a month and medical material such as hygiene kits, wheelchairs, crutches, bandages, and examination gloves.