Chinese communists are quietly dominating countries around the world. In this shocking episode, Tucker travels to Brazil to see how China is replacing America as the dominant power in the Western Hemisphere.

U.S. military leaders are deeply concerned about a surge in Chinese-owned ports in Latin America and the Caribbean that "could benefit its military," according to a report by the U.S.-China Commission (USCC).

"Why would China need to build naval bases around the world?" said Sen. Marco Rubio, R-Fla., a member of the Senate Intelligence Committee. "They'll have visiting rights to basically nationalize and operationalize any port they control in the world in a time of conflict, if necessary, and there won't be anything we can do about it."

Chinese state-owned companies are involved in the construction of roughly 40 ports on both sides of the Panama Canal, according to the report. The Chinese military already has been running a space tracking station in Argentina.

In Brazil, South America’s largest and richest country, Chinese state-owned companies are building or leasing ports along Brazil’s massive Atlantic coast. The investments have positioned "China to further increase its military presence in the future," according to the USCC report. 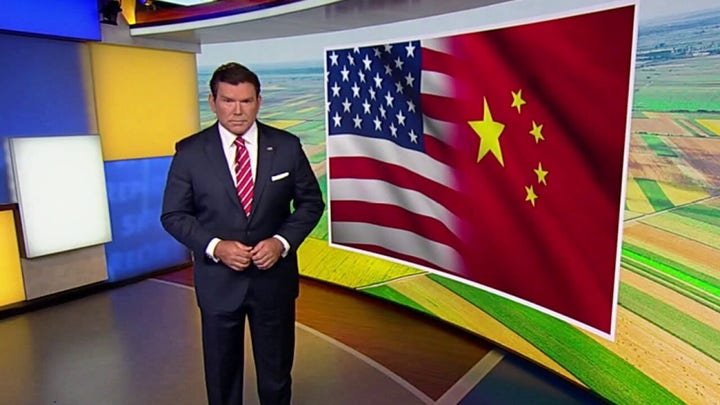 In April, China’s biggest state-owned food processor secured a long-term lease for a terminal at Brazil’s largest port near São Paulo. Other Chinese state-owned firms control ports on the northern coast and near Rio de Janeiro.

China has spent more than $2.25 trillion on foreign investment and construction since 2005, according to a website maintained by American Enterprise Institute.

A container ship arrives in the Port of Long Beach, California. (Stock, File)

LANTERNFLIES FROM CHINA CAUSING MILLIONS OF DOLLARS IN DAMAGE TO US AGRICULTURE: EXPERT

Those infrastructure projects are the focus of the latest episode of "Tucker Carlson Originals," titled "The China Takeover: Brazil." The episode is available now on Fox Nation.

"It's very clear that they think about Brazil as a source of food and other things. They need to keep the machinery going on," Martins said.

China’s ascent in the region fueled the rise of Bolsonaro, a political outsider who made countering China a central tenet of his 2018 presidential campaign.

After his election, Bolsonaro fought the introduction of Chinese vaccines. He has opposed legislation that would make it easier for Chinese firms to buy Brazilian resources.

"We tried to do things differently. Go ahead with privatization, yes, but with some kind of guarantee to ensure that whatever was being privatized would not become the property of a third-party country," Bolsonaro told Tucker Carlson in an interview featured in the documentary.

Some of Bolsonaro’s relatives and senior cabinet members have attacked China on social media, prompting harsh condemnations from the Chinese ambassador to Brazil.

"I would very much like the Americans to also take part in more investments in Brazil," he told Carlson. "Ever since I was a young child, the United States were seen as an example."

U.S. officials have repeatedly rejected outreach from Bolsonaro, who said President Joe Biden snubbed him at a G20 summit and called him only once during his first year in the White House. In July, a group of 23 House Democrats sent a letter to Biden condemning Bolsonaro.

Next month, Bolsonaro is set to face off against popular former President Luiz Inácio Lula da Silva, who has praised "the Chinese model" in speeches.

"I think China is an example of development for the world," he said in a video on China-Brazil relations.