US and China agree on North Korea sanctions after nuclear test 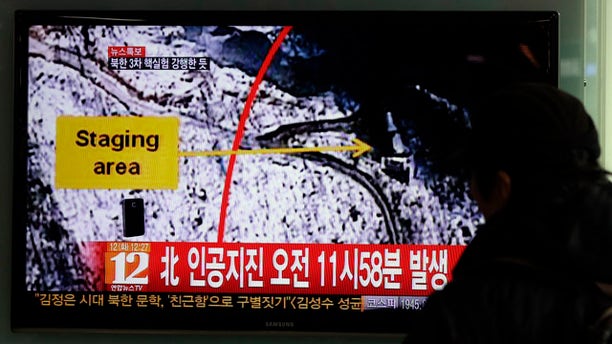 A U.S.-China draft resolution to punish North Korea for its latest nuclear test would impose some of the toughest sanctions ever ordered by the United Nations, U.S. Ambassador Susan Rice said Tuesday.

Rice circulated the draft to Security Council members Tuesday. She told reporters that "the breadth and scope of these sanctions is exceptional" and that they would further impede the growth of North Korea's nuclear weapons and ballistic missiles programs.

"We hope for a unanimous adoption later this week," Rice said.

The fourth sanctions resolution would for the first time target illicit activities of North Korean diplomats and illicit banking relationships and cash transfers, Rice said. The resolution pledges to take further measures if North Korea carries out another missile launch or nuclear test, she added.

Hours before the U.N. meeting, Pyongyang threatened to cancel the 1953 cease-fire that ended the Korean War, as tensions on the Korean Peninsula soared again over the February nuclear test.

Any fresh international sanctions are certain to infuriate North Korea, which has claimed the right to build nuclear weapons to deter alleged U.S. aggression. Citing the U.S.-led push for sanctions, the Korean People's Army Supreme Command on Tuesday warned of "surgical strikes" meant to unify the divided Korean Peninsula and of an indigenous, "precision nuclear striking tool."

China is North Korea's closest ally, but it has indicated it is concerned about Pyongyang's behavior.

Hours after North Korea carried out its third atomic blast on Feb. 12, all 15 council members approved a press statement condemning the nuclear test and pledging further action. The swift, unanimous response from the U.N.'s most powerful body set the stage for a fourth round of sanctions.

North Korea's neighbors and the West condemn the North's efforts to develop nuclear missiles capable of hitting the United States as a serious threat to Northeast Asia's delicate security and a drain on the precious resources that could go to North Korea's largely destitute people.

North Korea says its nuclear program is a response to U.S. hostility that dates back to the 1950-53 Korean War, which ended with an armistice, not a peace treaty, leaving the Korean Peninsula still technically in a state of war.

North Korea says Washington and others are going beyond mere economic sanctions and expanding into blunt aggression and military acts.

The North's latest nuclear test was seen as a crucial step toward its goal of building a bomb small enough to be fitted on a missile capable of striking the United States. Many outside analysts still believe the North hasn't achieved such a miniaturization technology.

The sanctions have been aimed at trying to derail the country's rogue nuclear weapons and ballistic missile programs. They bar North Korea from testing or using nuclear or ballistic missile technology, and from importing or exporting material for these programs.