Uruguay to sell legal pot for $1 per gram, official says 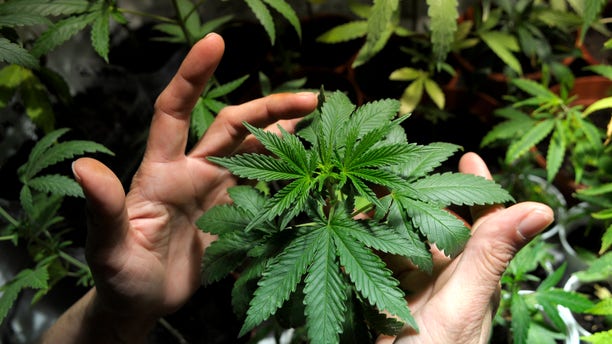 FILE - In this Nov. 14, 2012 file photo, a marijuana grower shows plants he is cultivating with some friends in Montevideo, Uruguay. Uruguay is toying with prices for legal marijuana. A law already passed in the lower house of Congress and expected to pass in the Senate in 2013 would make Uruguay the first country in the world to license and enforce rules for the production, distribution and sale of marijuana for adult consumers. (AP Photo/Matilde Campodonico, File) (The Associated Press)

Uruguay's drug czar says the country plans to sell legal marijuana for $1 per gram to combat drug-trafficking, according to a local newspaper.

The plan to create a government-run legal marijuana industry has passed the lower house of Congress, and President Jose Mujica expects to push it through the Senate soon as part of his effort to explore alternatives in the war on drugs.

The measure would make Uruguay the first country in the world to license and enforce rules for the production, distribution and sale of marijuana for adult consumers.

Marijuana sales should start in the second half of 2014 at a price of about $1 per gram, drug chief Julio Calzada told a local newspaper, El Pais, on Sunday.

That's an eighth or less of what marijuana costs at legal medical dispensaries in some U.S. states.

Calzada said one gram will be enough, "for one marijuana cigarette or two or three slimmer cigarettes."

He said the idea is not to make money, but to fight petty crime and wrench the market away from illegal dealers.

"The illegal market is very risky and of poor quality," he said. The State "is going to offer a safe place to buy a quality product and on top of that, it's going to sell it at the same price."

In August, he had estimated that the price would be around $2.50 per gram.

Sales would be restricted to locals, who would be able to buy up to 40 grams per month.

Smoking pot has long been legal in Uruguay, but growing, carrying, buying or selling it has called for prison terms.

In the U.S., the states of Washington and Colorado have legalized marijuana and adopted rules governing its sale.

Unlike Uruguay, they will tax pot, seeing it as a revenue source, when it goes on legal sale next year.

In Washington, the state marijuana consultant has projected legal pot might cost between $13 to $17 per gram, though some people suggest that's high.

Marijuana in the medical dispensaries typically ranges from $8 to $14 per gram in Washington depending on quality.