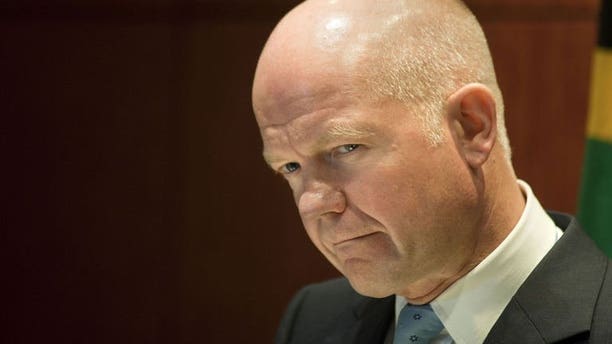 Foreign Secretary William Hague gives a press conference on September 10, 2013, in Cape Town. Britain would back any "credible" UN Security Council resolution on Syria's chemical weapons programme, but it must contain the threat of force, Hague said. (AFP)

Britain would back any "credible" UN Security Council resolution on Syria's chemical weapons programme, but it must contain the threat of force, Foreign Secretary William Hague said Tuesday.

"It certainly would need to be a chapter seven resolution to have any meaning and credibility on this subject," Hague said in Cape Town, referring to rules authorising the Security Council to enforce a resolution with military action if necessary.

Hague said he will talk by telephone later Tuesday with his French counterpart Laurent Fabius about the resolution, which is expected to be submitted by Paris later Tuesday.

The resolution would demand full disclosure by President Bashar al-Assad's regime of the scale of its weapons programme, and that the arsenal be placed immediately under international control and then dismantled.

"Time is short of course to try to ensure that there is something here that is credible and I agree with my colleagues in France that we need a strong and united response from the Security Council if we are to make progress on this," said Hague.

Following Russia's unexpected proposal on Monday for Syria to place its chemical weapons under international control to avert US military action, Hague said a "serious and genuine offer from the Assad regime" would be welcome and encouraged.

"But we have to make sure that this is not just a distraction tactic, that it's not yet another attempt to place obstacles in the way of resolving these issues."

"And so I think the onus is on Russia and on Syria to show that this is credible, that this could credibly be done," he said.

Timeframes over such a handover and who would be put in control of the stockpiles were among the questions that needed to be answered.

"Of course, we have to remember that it was only yesterday that Assad was denying the very existence of chemical weapons stocks, that it's not a new idea to transfer their chemical weapons to international control, and that this is a regime that has consistently failed to match its promises with actions," said Hague.

"So we would have to make sure that this is not just a device to fool the rest of the world and to use up time and make it harder to reach international agreement on these matters."

Syrian Foreign Minister Walid al-Muallem, who is on a visit to Moscow, on Tuesday said Damascus had "already agreed" to the Russian proposal to hand over its chemical weapons stockpile, saying doing so would "knock the chair from under the legs of the American aggression".