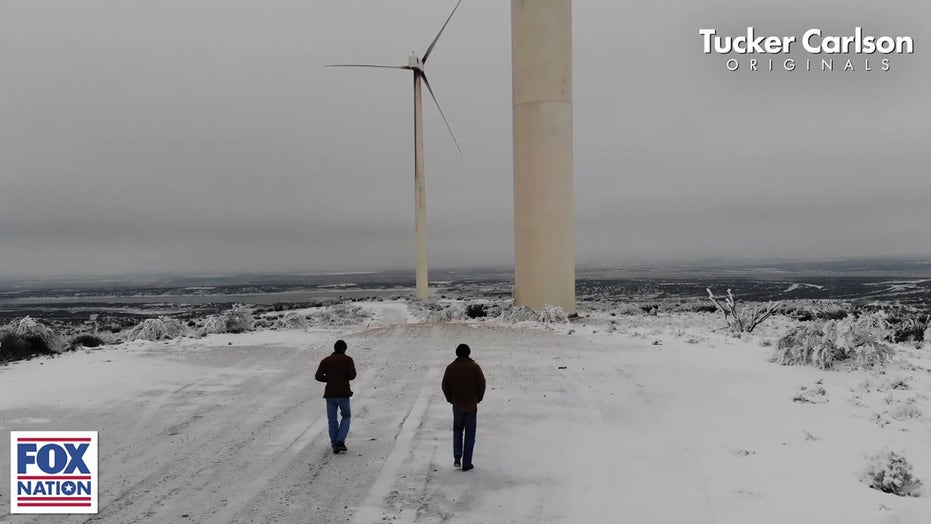 Tucker Carlson and his team learn more about what led to Texas’ electrical grid blackout in ‘Blown Away: The People Vs Wind Power’

The world needs to cut half its production of fossil fuels in the coming decade to maintain a chance of keeping up with global targets, according to a new U.N. report.

A U.N. Environment Program report found that governments have made ambitious pledges but continue to encourage the "production gap," in which they increase production while setting bold climate goals.

A construction worker specializing in pipe-laying sandblasts a section of pipeline on July 25, 2013 outside Watford City, North Dakota. North Dakota is currently experiencing an oil boom, creating thousands of jobs throughout the state and billions of dollars in new state revenue. Local two-lane roads that are used to access drill sites have taken a beating due to the unprecedented amount of traffic. Pipelines are being constructed across the state in part to streamline the movement of oil from drill sites to train depots and oil refineries. (Andrew Burton/Getty Images)

In one case, the report found the U.S., which produces around 11% of greenhouse gases, exports significant amounts of its oil, gas and coal production, which means the emissions do not show up in the U.S. inventory despite adding to the global total.

Officials have therefore urged governments to cut their production and stop plans to increase production over the rest of the decade.

"There is still time to limit long term warming to 1.5 degrees Celsius, but this window of opportunity is rapidly closing," said the agency’s executive director, Inger Andersen, adding that governments should commit to closing the gap at the Glasgow climate summit.

The goal of limiting the global temperature rise to below 1.5 degrees Celsius (2.7 degrees Fahrenheit) was set by the 2015 Paris climate accord. A less ambitious goal of capping global warming to 2 degrees by the end of the century would be difficult with the increasing production gap.

Costa Rica and Denmark plan to launch a new group at the Oct. 31 climate summit in Glasgow. The Beyond Oil and Gas Alliance would promote the effort to significantly cut production to meet the goals.

"We must cut with both hands of the scissors, addressing demand and supply of fossil fuels simultaneously," Costa Rica’s Environment and Energy Minister Andrea Meza said.

The study was carried out by 40 researchers who examined 15 major fossil fuel-producing countries.