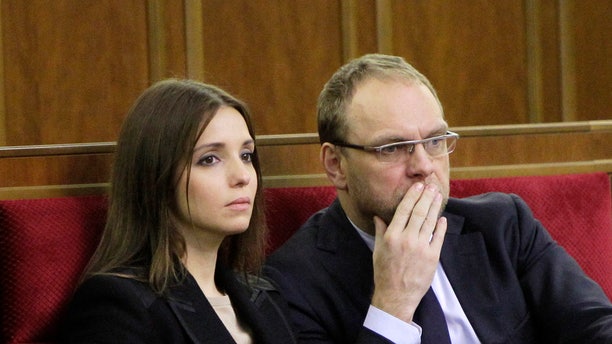 ADDS THAT THE OPPOSITION LATER SAID THAT HE WAS BEING QUESTIONED AND IS NOT ARRESTED FILE - In this Nov. 8, 2013 file photo, Eugenia Tymoshenko, daughter of imprisoned former Ukrainian Prime Minister Yulia Tymoshenko,left, and Serhiy Vlasenko, the lawyer of former Prime Minister Yulia Tymoshenko watch a parliament session in Kiev, Ukraine. Opposition leader Arseniy Yatsenyuk told a parliamentary committee hearing on Monday Nov. 11, 2013, that he has received a text message from Serhiy Vlasenko saying that he has been arrested, according to Yatsenyuk’s spokeswoman Olha Lappo. Tymoshenko’s office could not immediately confirm the arrest. Yatsenyuk said later that the opposition was reassured by a top prosecutor that Vlasenko is not arrested but is being questioned.(AP Photo/Sergei Chuzavkov, File) (The Associated Press)

Ukraine's jailed former premier, Yulia Tymoshenko, has accused President Viktor Yanukovych of killing the country's hopes to sign a landmark integration agreement with the European Union by going after her lawyer.

Tymoshenko's top attorney, Serhiy Vlasenko, was questioned on Monday on suspicion of beating his ex-wife. Vlasenko dismissed the accusations as "absurd" and aimed at depriving Tymoshenko, whose jailing is condemned by the West, of competent defense.

In a statement read by her daughter Eugenia on Tuesday, the opposition leader said that Yanukovych is "kicking the Association Agreement to death" by prosecuting Vlasenko.

Kiev hopes to sign a free trade and political association accord with the EU at the end of November. But the West is pressuring Yanukovych to first release Tymoshenko if he wants the deal.