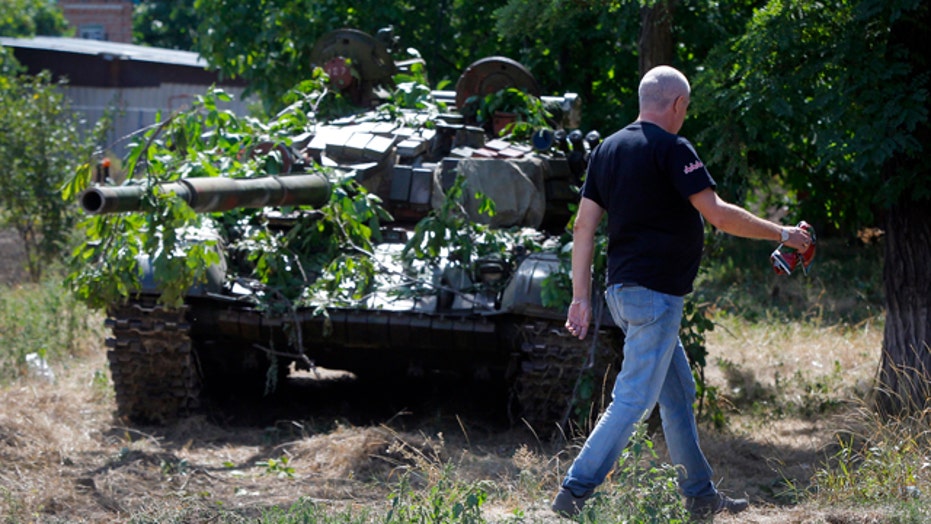 KIEV, Ukraine – Ukrainian forces say one of their fighter jets has been shot down by a Russian missile in combat against Russia-backed separatists in eastern Ukraine.

A brief statement posted Saturday on the Facebook page for the so-called operation against separatists said the Su-25 was hit on Friday, and that the pilot ejected and was uninjured. The statement said the plane was hit by a missile from a Russian launcher, but did not give more detail.

NATO estimates that at least 1,000 Russian soldiers are in Ukraine and Kiev claimed this week that Russian tanks and armored vehicles entered the country as rebels open a new front along the Azov Sea coast. Russia consistently denies both that its forces are in Ukraine and allegations that it is supplying the rebels.

Until this week, the fighting had been concentrated well inland. But rebels this week took control of the town of Novoazovsk with the apparent aim of pushing further west along the coast which connects Russia to the Russia-annexed Crimean Peninsula.

The expansion of the four-month-old conflict raised strong calls by the West for Russia to back off its involvement in Ukraine.

"We see regular Russian army units operating offensively on the Ukrainian territory against the Ukrainian army," said Swedish Foreign Minister Carl Bildt. "We must call a spade a spade."

The foreign ministers were set to propose new sanctions against Russia for consideration at a summit of the bloc's 28 heads of state on Saturday in Brussels.

All options except military action will be considered to punish Russia for pursuing "the wrong path," Luxembourg Foreign Minister Jean Asselborn said.

In an apparent bid for more support and tougher action against Russia, Ukrainian President Petro Poroshenko will address the summit on Saturday. He will also meet with European Commission President Jose Manuel Barroso, and summit Chairman Herman Van Rompuy in Brussels a few hours before the summit.

Fighting between Ukrainian military forces and Russian-backed separatists in eastern Ukraine has already claimed at least 2,200 lives, according to U.N. figures.