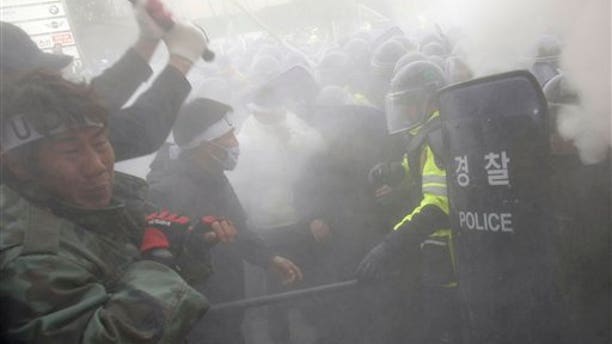 Hours after the drills began, residents of the South Korean island targeted by last week's barrage were ordered to evacuate to shelters after the military heard fresh artillery fire north of the disputed western sea border. None of the rounds landed on the island, and authorities later lifted the evacuation order.

Four South Koreans were killed last Tuesday when the North rained artillery on Yeonpyeong Island, home to both fishing communities and military bases, in one of the worst assaults on South Korean territory since the 1950-53 Korean War.

The war games in the Yellow Sea, south of the targeted island involve the USS George Washington supercarrier and display resolve by Korean War allies Washington and Seoul to respond strongly to any future North Korean aggression. However, Washington has insisted the drills are routine and were planned well before last Tuesday's attack.

The drills kicked off Sunday morning when ships from both countries entered the exercise zone, an official with South Korea's joint chiefs of staff said on condition of anonymity, citing office rules.

However, a spokesman for the U.S. military in South Korea said U.S. ships were still steaming toward the area and that the drills would not officially begin until later in the day.

"We will launch merciless counter-military strikes against any provocative moves that infringe upon our country's territoritorial waters," the North's main Rodong Sinmun newspaper said in a commentary carried by the official Korean Central News Agency.

South Korea was investigating the exact location of Sunday's artillery fire and whether it was part of North Korean exercises, an official with South Korea's Joint Chiefs of Staff said. He spoke on condition of anonymity, citing office rules.