U.S. on Target to Remove Combat Troops From Iraq by Month's End 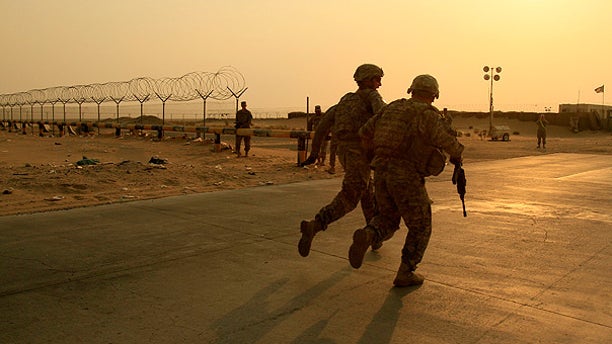 U.S. military officials are hustling to reduce the number of troops in Iraq to 50,000 to meet President Obama's Aug. 31 deadline for an end to U.S. combat operations, but as troops leave, the administration reportedly is planning to double the number of private security guards in the country.

A senior military official in Iraq said the Defense Department will meet the deadline for exiting combat troops.

"We are sitting around 55k and will be down to 50k by 1 September," the official wrote in an e-mail to Fox News.

The bulk of the 4th Stryker Brigade from the 2nd Infantry Division left the country on Thursday. Approximately 100 members of the brigade remain in Iraq to handle various administrative and supply issues. They will be out of the country within days.

Obama, who had imposed an end-of-the-month deadline for the pullout in February 2009, called it a milestone in the war though the remaining 50,000 support troops will stay in Iraq until the end of next year to train Iraqi forces.

The U.S. still has "a significant amount of influence" in Iraq, and the mission will be to provide support and help the country grow and "give economic development" assistance, said Maj. Gen. Stephen Lanza, a spokesman for Gen. Ray Odierno, the top U.S. commander in Iraq.

When the last of the military troops leave at the end of 2011, the Obama administration is planning to more than double the number of private security guards it has in Iraq -- up to 7,000 -- The New York Times reported late Wednesday, citing unnamed administration officials.

The U.S. State Department move is aimed at protecting civilians still exposed to Al Qaeda-linked insurgents and Iranian-backed militias. At the same time, Afghanistan is asking the United States to remove a bulk of its 45,000 private contractors from the country.

Contractors employed by the State Department will train the Iraqi police and U.S. diplomats in two new $100 million outposts will be left to defuse sectarian tensions in northern Iraq.

As the exit of the troops was shown live on TV in the U.S. Wednesday, U.S. State Department spokesman Philip Crowley described the end of combat operations as a "historic moment," but vowed that America's long-term commitment was unwavering.

"The last thing that we want to see is an occasion where we have to send troops back into Iraq yet again so we are ending the combat phase of our involvement in Iraq for a second time," he said.

"We're not ending our involvement in Iraq. We will have important work to do. This is a transition. This is not the end of something. It's a transition to something different. We have a long-term commitment to Iraq."

Crowley said that after spending $1 trillion in Iraq and with 4,400 lives lost, the conflict had come "at high expense."

"We've invested heavily in Iraq and have to do everything we can to preserve that investment to integrate Iraq, along with the neighborhood, into a much more peaceful situation that serves their interests as well as ours. But this is a historic moment."

Obama said the events were the beginning of the pullout he promised when he became president.

"As we mark this milestone in the Iraq war and our troops continue to move out of Iraq, I hope you'll join me in thanking them, and all of our troops and military families, for their service," Obama said.

"My administration will continue to do our part to support the brave men and women in uniform that have sacrificed so much. But supporting our troops and their families is not just the job of the federal government; it's the responsibility of all Americans.

"Shortly after taking office, I put forward a plan to end the war in Iraq responsibly. Today, I'm pleased to report that -- thanks to the extraordinary service of our troops and civilians in Iraq -- our combat mission will end this month, and we will complete a substantial drawdown of our troops.

"Consistent with our agreement with the Iraqi government, all of our troops will be out of Iraq by the end of next year. Meanwhile, we will continue to build a strong partnership with the Iraqi people with an increased civilian commitment and diplomatic effort."

NewsCore contributed to this report.