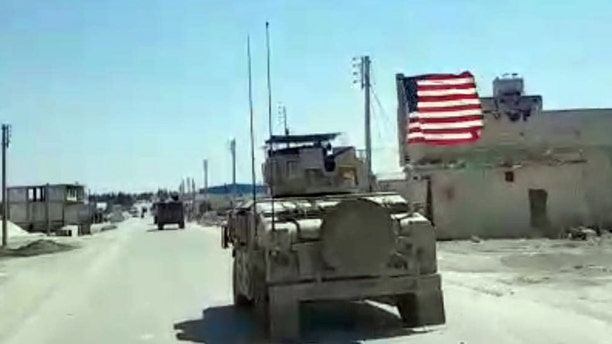 A U.S. humvee rumbles down the street in Manbij, one of the bases of operation for American troops in Syria. (Hollie McKay/Fox News)

The quiet, low-profile U.S. military presence in Syria isn’t quite so low-profile up close.

The American flag flies high from a number of a dozen or so positions the military has established, and can be spotted from afar as convoys rumble along dusty village roads in and around this northern Syrian town, near the Turkish border. And while most of the 2,000 troops the Pentagon has said are here are usually confined to their bases -- some of which were occupied by Islamic State militants not long ago -- they aren’t unnoticed.

The Americans visit local shops and restaurants, and from time to time local civilians here excitedly spot them making their way about. Small groups of U.S. soldiers have also been spotted in the former Islamic State (ISIS) “caliphate” of Raqqa, alongside Syrian Democratic Forces (SDF) being trained by the Americans in everything from media and camera use to weapons training.

There’s no denying the familiarity of the U.S.-SDF partnership: the shared offices, meals, cigarettes, family stories.

And while President Donald Trump spoke Tuesday of a pullout from Syria, he qualified his statement this time with the proviso that the withdrawal will happen when the mission is complete. That has the SDF expecting and hoping the Americans will stay at least long enough to clean out what’s left of ISIS resistance in the region. 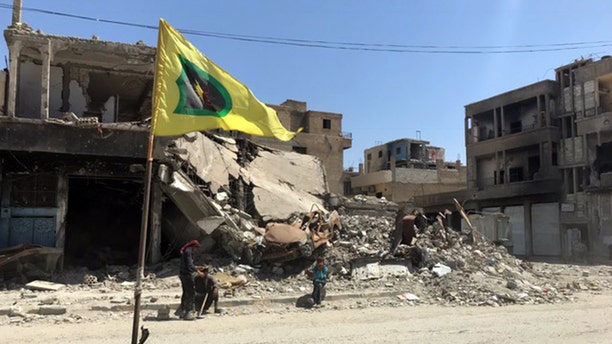 The former ISIS capital of Raqqa has been liberated, but suffered extensive damage. (Hollie McKay)

A new offensive against ISIS, called Deir-ez-Zor by the SDF, is set to resume in the coming days. Military officials here are viewing it as the end game against the Islamic State.

“It will likely take two to three months for the operations to be completed,” Keno Gabriel, an SDF spokesperson, told Fox News. “But after that, about another three to six months to clean up the cells and other threats.”

The U.S. has already invested more in the fight than many Americans realize. Since the stunning rise of ISIS across Iraq and Syria in 2014, the United States has spent a daily average of more than $13 million, according to Defense Department figures. At least 8,000 troops are in the region at any given moment, and more than 60 from the American military have been killed in combat and non-combat-related deaths.

But the effort is said to have paid off. ISIS has been driven from more than 90 percent of the territory it once conquered, and has been reduced to pockets along the Iraq-Syria border.

An American withdrawal could be disastrous, say those who have come to view the U.S. flag as a beacon of peace in this war-ravaged region, as was the case  when the Americans initially withdrew from Iraq after removing Saddam Hussein from power. 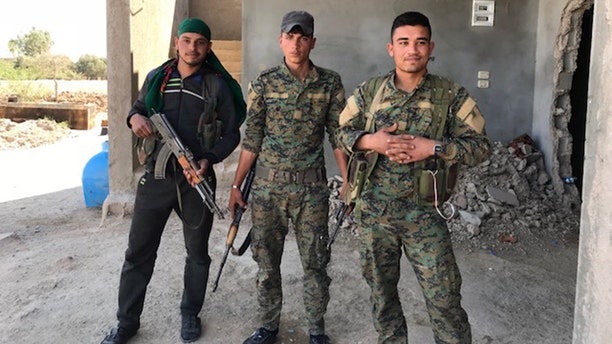 Forces for the Kurdish-led Syrian Defense Forces hope the U.S. stays in the fight against ISIS. (Hollie McKay/Fox News)

“A complete U.S. withdrawal is a lesson that should be learned from Iraq; the U.S. is a major player and a major stabilizing force in the Middle East,” Gabriel cautioned.

Indeed, despite talk of withdrawal, the U.S. presence has actually expanded here over the last year.

“The Americans started with just one base and now there are two more just in Manbij, bigger than before,” said Abu Adel, head of the Manbij Military Council. “Of course we want them to stay. They said they will protect us.”

Syrian Kurds fear more than ISIS or the return of Syrian government control. Turkish forces who view the SDF as an offshoot of the Kurdistan Workers' Party, which has waged a separatist military campaign against Turkey for more than 30 years, have already taken the nearby town of Afrin, and have openly spoken of cleansing Manbij of “terrorists.”

Anwar Moslim, 45, an official in the presidency of the Euphrates Region Office in Kobane, said the Americans were also key to the continued presence of nongovernmental organizations that have come from abroad to help Syrians.

“Having the U.S. gives us hope and stability, not just for Kurdish people, but for all of us living together here in Syria,” Moslim said. “We have concern what might happen if they go. Who will invade us? Who will attack us?”

Trump, who has clearly focused the mission here as only to defeat ISIS, has affirmed that America “does not seek an indefinite presence in Syria,” and he has looked to other nations to step up their contributions.

“The United States did the heavy lifting in defeating ISIS in Syria by working closely with the Syrian Democratic Forces on the ground and providing the bulk of the air support that enabled the SDF to roll back ISIS forces,” said James Phillips, senior research fellow for Middle Eastern affairs at the Heritage Foundation. “It is time for U.S. allies to step forward to assume a greater role in stabilization efforts in eastern Syria, and free up American Special Forces for other missions.”

The role of coalition partners in Syria might seem nonexistent, but they are here contributing to the effort, SDF leadership insists.

General Mazloum noted that the UK and France have forces in Syria in the anti-ISIS campaign, training the protection forces but the U.S is in the main role.

Mazloum noted that coalition forces have been working alongside the SDF since late 2015, and that they “have taken part in all the campaigns against ISIS.”

There seem to be no flags, uniform patches or public presence by British or French troops, locals here say. The French, though, “recently played a main role in defending Manbij,” said Farooq Al Mashi – who co-chairs the Legal Council of Manbij. 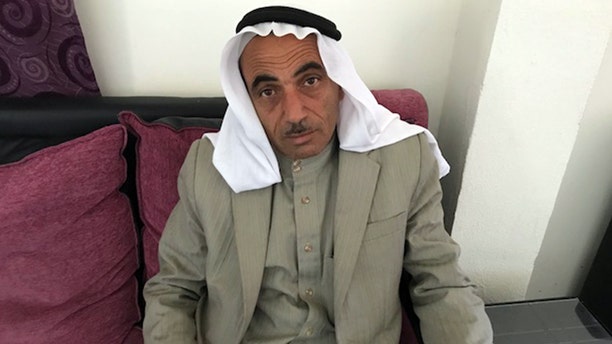 Gabriel, too, praised the role of the British and the French, and predicted they will only step up their involvement. “The UK and the French have been very effective. I think France will take a bigger role, they will increase if the US leaves,” he said. “The French have a long history with Syria, they really understand the dynamics.”

A statement by the French Armed Forces to Fox News said 1,100 personnel have been committed to the anti-ISIS effort, in two types of missions: advising and training missions in Iraq, and operational support to allied forces fighting ISIS.

“The French military operates in Syria against ISIS but does not own any facility on Syrian soil,” the statement said. “Its missions in Syria are conducted by air capacities based in Jordan and the United Arab Emirates.”

Gabriel said that each nation had roughly 200 pairs of boots on the ground, though such numbers could not independently confirmed. The British have denied the presence of troops here, even though one of their soldiers was killed alongside an American near Manbij last month.

Another British official, speaking on the condition of anonymity, told Fox News the U.K. contribution was strictly air support -- that it has the assets at RAF Akrotiri, its base in Cyprus, and remains “engaged in Operation Shader," the British codeword for the intervention against ISIS. And the Brits don’t seem to be packing up any time soon.

Some doubt the ability of any coalition effort that doesn’t include a prominent American presence to successfully keep up the pressure.

“Other NATO and coalition forces can of course assist in the continued fight against ISIS and violent jihadists,” said Alan Mendoza, executive director of the Henry Jackson Society, a British conservative foreign policy think tank. “But only the U.S. has the capacity to manage a joined-up military campaign at every level, so its continued engagement is essential.”

Layla Mustafa, who co-chairs the newly formed Raqqa Civilian Council, emphasized that the mere notion of the U.S. pulling out is “more than just a worry,” but said the onus should be on international partners, too.

“We fought ISIS here on behalf of the whole world, and we should receive support from all countries,” she said. “Not just the U.S.”

Trump’s reported plan to support an “Arab force” to maintain security after a U.S. withdrawal has some support in the SDF.

But the looming question of how Turkey will respond remains a huge issue. In a bid to ease mounting tensions, one high-ranking U.S. official in Ankara, the Turkish capital, told Fox News that America has  continued to tell NATO ally Turkey that the SDF “is not an ally” in the same sense. And the U.S.-SDF agreement has always been to “shake hands and move on” once ISIS is defeated.

Many Syrian Kurds would like to see what happened in Iraq – where at least 70 countries publicly participated in the anti-ISIS fight – happen here, too. Though even there, the future of the U.S. presence is not open-ended, and depends on the good will of the Baghdad government.

“We are here for as long as the Iraq government needs us to help then defeat ISIS,” Eifler said this week from Erbil, Iraq. “The people do not want to go through this (ISIS invasion) again. Iraqis have spent a lot of blood and treasure. And they have come a long way.” 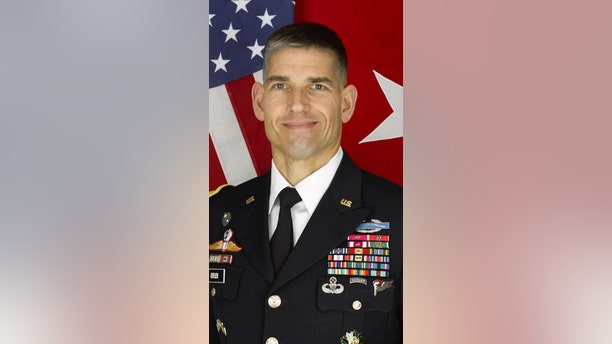 The Kurds hope for the same U.S. resolve in Syria.

Mazloum told Fox News that he has requested that a no-fly zone be implemented over the region should the U.S. withdraw, in hopes of avoiding bombardment by the Syrian and Russian forces.

But he hopes it doesn’t come to that.

“We have been partners with the U.S. and the coalition against terrorism, and of course we hope this partnership will stay for a long time to defeat all of this terrorism,” he said. "Still, we are waiting for the final decision.”