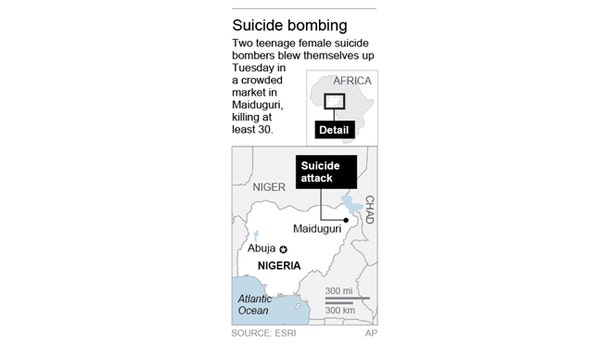 Two teenage female suicide bombers blew themselves up Tuesday in a crowded market in Nigeria's northeastern city of Maiduguri, killing at least 30 people, according to witnesses and a security official.

Boko Haram, Nigeria's Islamic extremist rebels, are suspected of the bombings, as they have carried out many similar attacks. The bombings highlight Nigeria's ongoing insecurity in which 1,500 people have been killed by the militant's insurgency this year, according to Amnesty International.

The first set off her explosives and killed about three women, said Kalli.

When others gathered around the scene, the second bomber screamed and blew herself up, killing about 30, he said.

"I am right here at the scene and I have before me 11 corpses ... many have been taken away by relatives, while others are taken to the state specialists' hospital," said Kalli.

Soldiers and police officers cordoned off the area while rescue workers helped survivors to the hospital. Nigeria's police have not yet issued a statement on Tuesday's blasts.

Today's blast is the first in Maiduguri since July 2 when 56 people were killed in the same market area when a car bomb hit a group of traders and shoppers.

Maiduguri is the provincial capital and largest city in Borno state, one of the three states in northeastern Nigeria that are under a state of emergency because of the extremist violence.

In April Boko Haram kidnapped more than 200 schoolgirls from Chibok, about 78 miles southwest of Maiduguri. The schoolgirls are still missing and their plight has aroused international concern and prompted the (hash)BringBackOurGirls social media campaign.

Last month, on Oct. 17, the parents were encouraged when the Nigerian military announced a cease-fire with Boko Haram and said negotiations had begun for the release of the schoolgirls.

Those hopes were quickly dashed, however, when Boko Haram fighters continued attacks and seized several cities and towns across the northeast. In a video statement, Boko Haram leader Abubakar Shekau denied the ceasefire and scoffed at claims of negotiations to release the schoolgirls.

Boko Haram still holds many centers in an area covering an estimated 7,700 square miles and has declared the area to be an Islamic caliphate where they are imposing their strict version of Shariah law. The insurgents want to impose Islamic rule over all Nigeria, Africa's most populous state with its 170 million people about evenly divided between Christians and Muslims.