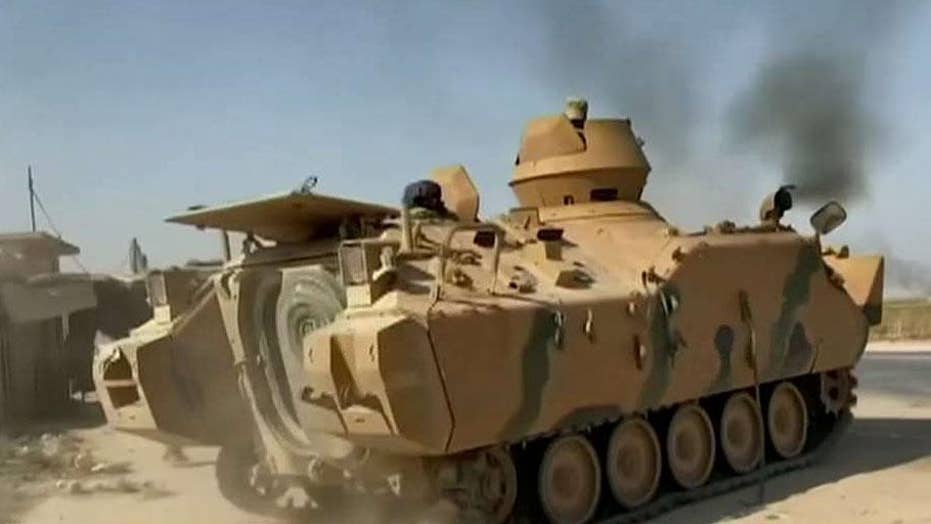 Fresh airstrikes from Turkey reportedly targeted civilians and a group of foreign reporters in the Syrian border town of Ras al-Ayn, according to monitoring groups and Syrian Kurdish officials.

The Syrian Observatory of Human Rights said the airstrike killed at least nine people - including five civilians on Sunday, while other reports claimed that the convoy included foreign journalists, according to Haaretz.

A spokesman for the Kurdish forces put the death toll at 11 killed and more than 74 injured, but it was not immediately clear how many were civilians.

In this photo taken from the Turkish side of the border between Turkey and Syria, in Akcakale, Sanliurfa province, southeastern Turkey, Turkish-backed Syrian opposition fighters on pick-up trucks drive in Tal Abyad, Syria, Sunday, Oct. 13, 2019. State-run Anadolu news agency reported Tal Abyad had fallen to a Turkish military offensive on Sunday. Even after the announcement, sporadic gunfire and the occasional mortar round could still be heard in the town, which is on the border with Turkey, while smoke could be seen rising from several points in the town. (AP Photo/Cavit Ozgul)

France 24 reported that at least one journalist was also among the dead, while two French reporters were also injured in the attack. The nationality of the slain journalist was not immediately confirmed.

French reporter Stephanie Perez said on Twitter that she as on the convoy with Kurdish civilians when the airstrikes hit.

"Our team is fine but some colleagues are dead," she wrote in French.

Hawar News confirmed that one of their journalists was killed in the airstrike, while the northern Syria-based North Press Agency (NPA) reported one of its journalists - named by the agency as Delsoz Yousef - was among the injured.

Images of the attack showed bodies and severed limbs strewn in the street. Some of those killed appeared to be carrying guns. Activists said the gunmen were guarding the convoy.

WHY IS TURKEY ATTACKING THE KURDS? EXPERT BREAKS IT DOWN?

The airstrikes came hours after President Trump ordered all U.S. troops to withdraw from the area to avoid getting caught in the middle of the fast-escalating conflict. The announcement represents a major shift in alliances for Syria's Kurds after they were abandoned by the U.S., with whom they were longtime partners in the fight against the Islamic State group.

The Syrian government said it would deploy troops along the border with Turkey to help Kurdish fighters fend of Turkey's invasion of northern Syria, the Kurds said.

A child stands across from a building damaged by a mortar fired from inside Syra, in Akcakale, Sanliurfa province, southeastern Turkey, Sunday, Oct. 13, 2019. Incoming shells fired from northeastern Syria hit the house earlier on Sunday. Two residents were at the house and were evacuated. (AP Photo/Lefteris Pitarakis)

The dizzying developments reflected the rapidly growing chaos that has unfolded in the week since Trump ordered U.S. forces in the region to step aside, clearing the way for the Turkish attack on the Kurdish fighters it considers terrorists.

U.S. Defense Secretary Mark Esper announced Sunday all American troops will withdraw from northern Syria because of the increasing danger posed by the fighting.

"We have American forces likely caught between two opposing advancing armies, and it's a very untenable situation," he said on CBS' "Face the Nation." He did not say how many would withdraw or where they would go but that they represent most of the 1,000 U.S. troops in Syria.

The Turkish military has said it aims to clear Syrian border towns of Kurdish fighters' presence, saying they are a national security threat. Since Wednesday, Turkish troops and Syrian opposition fighters backed by Ankara have been advancing under the cover of airstrikes and artillery shelling.

A Syrian Kurdish official and a war monitor also said Syrian government forces were poised to enter Kurdish-controlled towns from which U.S. troops are pulling out, following a deal reached through Russia.

The Syrian Observatory for Human Rights said the deal covered the towns of Kobani and Manbij. U.S. troops were deployed in the towns after they were cleared of Islamic State militants in 2015.

The Kurdish fighters had few options after the United States abandoned them, and it had been anticipated they would turn to the government of Syrian President Bashar Assad and its Russian allies for support.

The Syrian troop movements raise the risk of a clash between Syria and Turkey.

Turkish President Recep Tayyip Erdogan on Sunday ruled out any mediation in the dispute with the Kurds, saying Turkey won't negotiate with "terrorists." NATO member Turkey views the Syrian Kurdish fighters as terrorists because of their links to the Kurdish insurgency inside Turkey.