Tsunami kills over 280 in Indonesia, sweeps band off stage after volcano eruption

A tsunami struck Indonesia virtually without warning, killing more than 280 people, sweeping away members of a pop band performing on a beach.

Hundreds of homes and other buildings were “heavily damaged” when the tsunami set off by an eruption of the Anak Krakatau volcano hit late Saturday around the Sunda Strait, Reuters reported.

Thousands of residents were forced to evacuate to higher ground, according to the news wire. Late Sunday afternoon the disaster agency had raised the death toll over 280, with more than 1,000 injured and at least 28 missing.

The missing included one member of the band Seventeen, which was performing on stage at a beach resort on the western tip of the Indonesian island of Java when the giant wave hit, Sky News reported.

Video footage was posted on social media showing the stage lurching forward into the audience along with the band and its equipment. 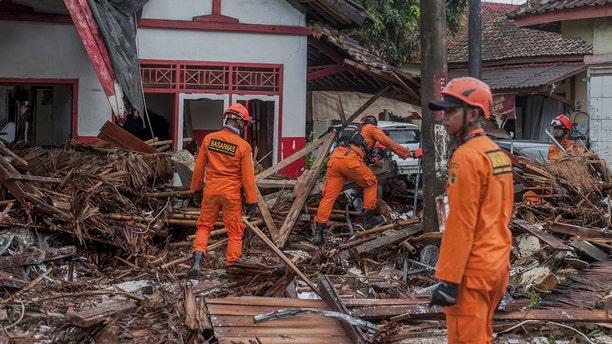 The band’s singer Reifian Fajarsyah said Sunday on social media that his wife and the band’s drummer were missing. He also paid tribute to the band’s bass player and road manager who were killed.

"The tide rose to the surface and dragged all the people on site," he said. "Unfortunately, when the current receded our members were unable to save themselves while some did not find a place to hold on."

The timing of the tsunami three days before Christmas evoked memories of the Indian Ocean tsunami triggered by an earthquake on December 26 in 2004, when 226,000 people from 14 countries, including more than 120,000 in Indonesia, were killed, Reuters reported.

"I had to run, as the wave passed the beach and landed 15-20m (meters, or 50-65 feet) inland," Norwegian Oystein Lund Andersen said on Facebook. He was taking pictures of the volcano when he suddenly saw the water racing toward him. He and his family fled safely to higher ground.

The Anak Krakatau volcano lies in the Sunda Strait between Java and Sumatra islands, linking the Indian Ocean and Java Sea. It erupted about 24 minutes before the tsunami, the geophysics agency said. 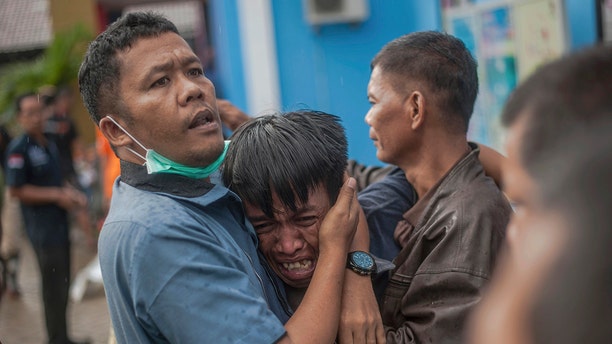 A man reacts after identifying his relative among the bodies of tsunami victims in Carita, Indonesia, Sunday. (AP Photo/Fauzy Chaniago)

"My deep condolences to the victims in Banten and Lumpung provinces," he said. "Hopefully, those who are left have patience."

Azki Kurniawan, 16, said he was undergoing vocational training with a group of 30 other students at Patra Comfort Hotel when people suddenly burst into the lobby yelling, "Sea water rising!"

With his eyes swollen and red from crying, he recalled being confused about what was happening because he did not feel a big earthquake, which usually serves as a warning before a tsunami strikes. He said he ran to the parking lot to try to reach his motorbike. But by the time he got there, it was already flooded. 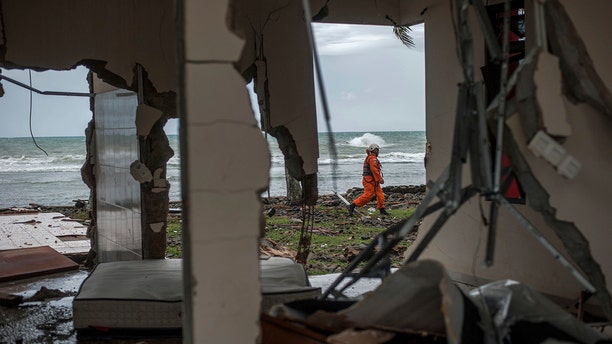 A rescuer is seen through a damaged house as he takes part in a search operation of tsunami victims in Carita, Indonesia, Sunday. (AP Photo/Fauzy Chaniago)

"Suddenly a 1-meter (3.3-foot) wave hit me," he said. "I was thrown into the fence of a building about 30 meters (100 feet) from the beach and held onto the fence as strong as I could, trying to resist the water, which felt like it would drag me back into the sea. I cried in fear ... 'This is a tsunami?' I was afraid I would die."

As night fell on Sunday, rescue efforts continued but workers and ambulances were finding it difficult to reach affected areas because some roads were blocked by debris from damaged houses, overturned cars and fallen trees, according to Reuters.