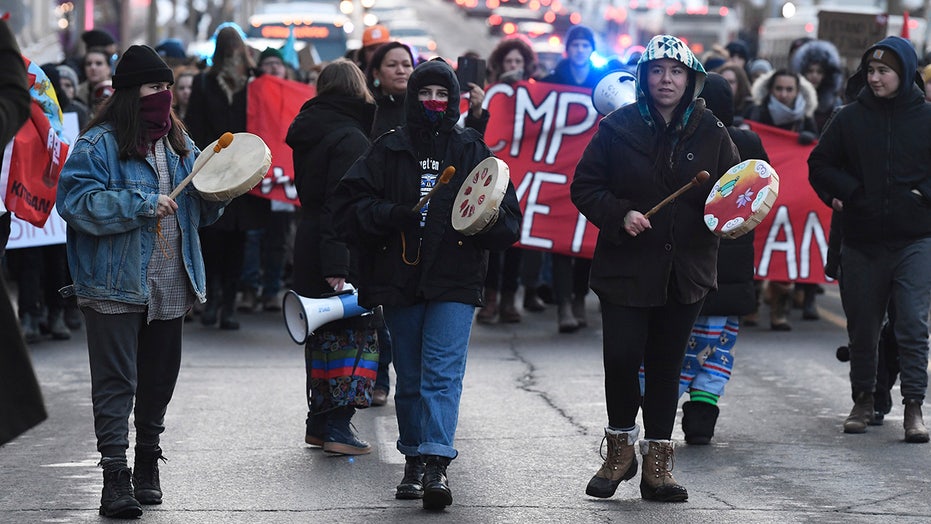 Canadian Prime Minister Justin Trudeau canceled a scheduled trip to the Caribbean Sunday amid harsh backlash over his government’s handling of major blockades on railways across British Columbia and other parts of the country in response to a $5 billion pipeline project.

Tens of thousands of passengers were forced to cancel their trips on railways across Canada last week as indigenous groups and environmental activists blocked and put up barriers along major track lines across the country. The Canadian Chamber of Commerce called the situation an “emergency” for the country’s economy as blockades on railroad tracks prevent the transport of food, fuel and other consumer goods throughout the country and into the northern United States.

Protesters march on a street in Ottawa, Ontario, Wednesday, Feb. 12, 2020. The protesters are standing in solidarity with the Wet'suwet'en hereditary chiefs opposed to a Canada gas pipeline in northern British Columbia. (Adrian Wyld/The Canadian Press via AP)

The organized blockades on strategic railway points began Feb. 6 in response to the government’s plan to build a $5 billion Coastal GasLink natural gas pipeline that crosses the traditional territory of the Wet'suwet'en First Nation near Houston, British Columbia. The protests at railways came in response to the Royal Canadian Mounted Police (RCMP) raiding camps set up by the Wet’suwet’en Nation at the pipeline construction site. Dozens were arrested in that raid.

Canadian National Railway (CN), the nation’s largest railway network, announced Thursday the beginning of “a progressive and orderly” shutdown of its lines in eastern Canada after authorities failed to enforce court orders to end “illegal” blockades across Ontario, Manitoba, and British Columbia.

A protester carries a sign as he and others were marching on a street in Ottawa, Ontario, Wednesday, Feb. 12, 2020. The protesters are standing in solidarity with the Wet'suwet'en hereditary chiefs opposed to a Canada gas pipeline in northern British Columbia. (Adrian Wyld/The Canadian Press via AP)

“With over 400 trains canceled during the last week and new protests that emerged at strategic locations on our mainline, we have decided that a progressive shutdown of our Eastern Canadian operations is the responsible approach to take for the safety of our employees and the protestors,” JJ Ruest, president and chief executive officer at CN, said in a statement.

“This situation is regrettable for its impact on the economy and on our railroaders as these protests are unrelated to CN's activities, and beyond our control,” it said.

VIA Rail, the passenger train service that relies on CN’s infrastructure, subsequently suspended service on 150 trains that traveled between Toronto, Ottawa and Montreal, the Globe and Mail reported. About 250,000 passengers had already faced cancellations after a massive demonstration blocked VIA Rail’s major line in the Montreal-Toronto-Ottawa triangle, the Wall Street Journal reported.

“In addition to preventing access to public transportation for tens of thousands of individual Canadians, these disruptions severely limit the movement of perishable foods and other consumer items, grain, construction materials and propane for Quebec and Atlantic Canada,” President and CEO of the Canadian Chamber of Commerce Hon. Perrin Beatty wrote in the letter Wednesday addressed to the country’s ministers of transport and innovation, science and industry.

“The Canadian Chamber of Commerce is deeply concerned about the damage to the Canadian economy, the unfair denial of access to transportation services for Canadian citizens, and the undermining of the rule of law,” the letter said. “These illegal blockades, which also affect the movement of natural resources like timber, aluminum, coal and oil, will take an increasing toll if the government does not act decisively to restore order.

“A rail disruption of this magnitude constitutes an emergency for the Canadian economy,” it said.

Trudeau planned to convene with ministers and members of parliament Monday morning “to address infrastructure disruptions across the country & discuss the path forward.” Those in attendance would include Minister of Indigenous Services, Marc Miller, Minister of Crown-Indigenous Relations, Carolyn Bennett, Minister of Transport, Marc Garneau, Minister of Public Safety and Emergency Preparedness, Bill Blair, Canada’s Deputy Prime Minister and Intergovernmental Affairs Minister, Chrystia Freeland, the Member of Parliament for Honoré-Mercier, Pablo Rodrigez, and Member of Parliament for Toronto, Bill Morneau.