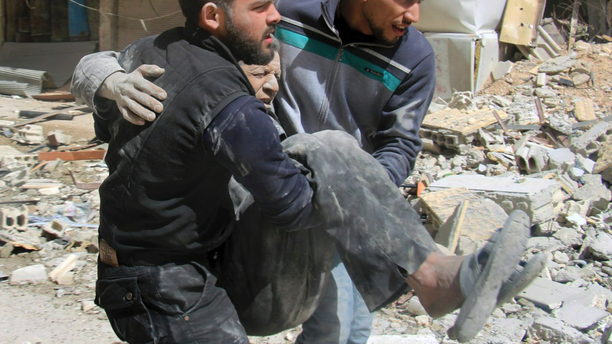 The Latest on developments in Syria (all times local):

The Russian military says more than 1,000 civilians have left the rebel-held eastern suburbs of the Syrian capital, Damascus, this morning.

A spokesman for a rebel faction in the region, known as eastern Ghouta, said earlier that the rebels and their families were expected to leave a besieged town in an evacuation deal that will see the town handed over to the government following years of siege and bombardment.

Syrian rebels and their families are expected to leave a besieged town in the eastern Ghouta suburbs of Damascus, in an evacuation deal that will see the town handed over to the government following years of bombardment.

Monther Fares, a spokesman for the rebel faction Ahrar al-Sham, says his group's fighters are preparing to leave. He says fighters are waiting for buses to arrive to take them and their families to other rebel-held areas in north Syria.

The deal is modeled after others that have had rebels surrender swaths of territory around the capital and other major cities to the government. The U.N. and human rights groups have condemned such arrangements as "forced displacement."