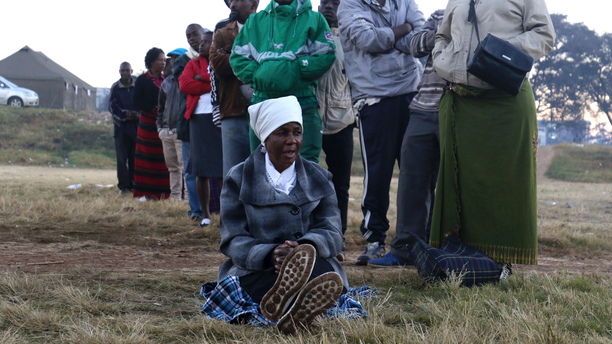 The Latest on Zimbabwe's election (all times local):

One of Zimbabwe's voters is the brother of Itai Dzamara, an activist abducted by suspected state agents in 2015 after urging longtime ruler Robert Mugabe to resign at a time when most Zimbabweans dared not do so.

Patson Dzamara says on Twitter that change is coming and he thanks his brother for "blazing a trail for me and others" with his brazen and sometimes solitary protests. "My brother Itai Dzamara, this is for you. I did it for you."

The missing activist's family and supporters have called on President Emmerson Mnangagwa, a former Mugabe enforcer, to explain what happened to Dzamara after he was bundled into a car by five unidentified men.

Mnangagwa, who took over after Mugabe resigned in November, has not responded. Mugabe on Sunday called Dzamara "that character" and claimed not to know about his fate.

Zimbabwe's president is urging the country to remain peaceful during a historic election, saying that "We are one people, with one dream and one destiny. We will sink or swim together."

The 75-year-old President Emmerson Mnangagwa took over after longtime leader Robert Mugabe stepped down in November under military pressure.

Mnangagwa's top challenger is 40-year-old Nelson Chamisa, who took over the main opposition party after the death of longtime Mugabe challenger Morgan Tsvangirai in February.

Zimbabwe's more than 5 million registered voters are forming long lines in the capital, Harare, and elsewhere.

Zimbabweans are voting in their first election without Robert Mugabe on the ballot, a contest that could bring international legitimacy and investment or signal more stagnation if the vote is seriously flawed.

About 5.5 million people are registered to vote on Monday in this southern African nation anxious for change after decades of economic paralysis and the nearly four-decade rule of the 94-year-old Mugabe.

Long lines of voters are waiting outside some polling stations. Thousands of election monitors are in the country to observe a process that the opposition says is biased against them.

The two main contenders are 75-year-old President Emmerson Mnangagwa, a former deputy president who took over from Mugabe last year, and Nelson Chamisa, who became head of the main opposition party just a few months ago.