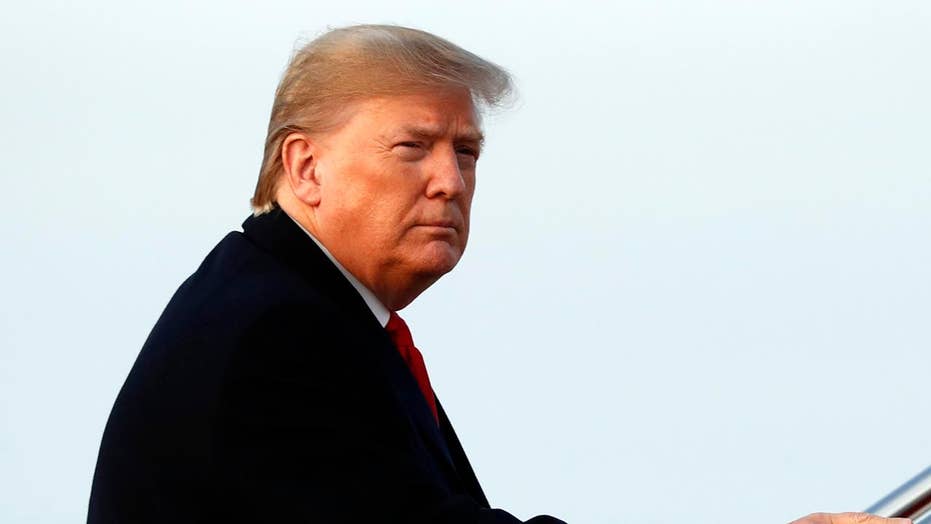 Senators Elizabeth Warren and Chris Van Hollen are asking the Securities and Exchange Commission to investigate whether individuals obtained confidential market-moving information when President Trump allegedly hinted about the Soleimani strike to guests at his Florida resort.

It has been almost five months since President Trump shocked the world by authorizing a strike to kill Iran's top spymaster and shadowy commander, Qassem Soleimani.

Fears of mass retaliation and a sinister spike in violence that would endanger U.S. troops and potentially lead to a full-blown war were instantly ignited. Baghdad threatened to kick the Americans out of the country, and woes of a more profound destabilization ensued, worries that Iran's proxy militias would grow even more out of control grew and many lamented that the blindsiding decision by the American commander in chief would bring animosity between Washington and Tehran to a tipping point.

So what, exactly, has been the fallout?

"Once again, the critics of Trump's Iran policy are wrong. There was no WW3 after the removal of the Islamic Republic's most important military official from the battlefield," Behnam Ben Taleblu, a senior fellow at the Foundation for the Defense of Democracies (FDD), told Fox News. "Four months since that game-changing strike, Iran's proxy network continues to operate, but without the charismatic and cunning terrorist who coordinated their efforts. Now is the time to ramp up the pressure on this network."

Protesters chant slogans and hold up posters of Gen. Qassem Soleimani during a demonstration in front of the British Embassy in Tehran, Iran, Sunday, Jan. 12, 2020. A candlelight ceremony late Saturday in Tehran turned into a protest, with hundreds of people chanting against the country's leaders — including Supreme Leader Ayatollah Ali Khamenei — and police dispersing them with tear gas. Police briefly detained the British ambassador to Iran, Rob Macaire, who said he went to the Saturday vigil without knowing it would turn into a protest. (AP Photo/Ebrahim Noroozi)

But as part of its campaign to keep the Soleimani legacy alive, Tehran has this year been steadily building the profile of the dead commander's 28-year-old daughter, Zeinab Soleimani. Little it is known about the general's personal life, other than he is survived by three sons and two daughters, but Zeinab catapulted into the limelight immediately after her father's death, by vowing to large crowds of mourners that "U.S. soldiers' families will spend their days waiting for the death of their children."

In late January, Zeinab met with Hezbollah leader General Hassan Nasrallah in Beirut and tweeted a video of the encounter with the caption "the spider nests of America and Zionists will collapse." Moreover, she has referred to Syrian President Bashar al-Assad and Houthi leader in Yemen, Abdalmalek Houthi, as her "uncles."

In early May, she was appointed by the regime to run the newly established Qassem Soliemani Foundation to maintain his legacy and doctrine, although it remains unclear how that will play out.

"As a revolutionary regime, the Islamic republic is always looking for icons which can be used in its propaganda machine to reproduce its narrative. Zainab Soleimani has all the hallmarks," Malik said. "With minimum cost, she can help indoctrinate young women who are seen as mothers who bring up the next generation of the revolution."

Although crippled by the coronavirus, of which Iran has been the most deeply impacted country in the Middle East, along with its embarrassing and tragic shooting down – and cover-up – of the Ukrainian airliner in the immediate aftermath of the Jan. 3 Soleimani slaying, Iran has purported to show strength in other ways. It is what foreign policy experts deem a bid to prove it will not appear feeble under pressure as it postures beneath the murky line of taking pride in its fortitude while playing the victim card.

THE MASTER BEHIND THE MASK: WHO IS IRAN'S MOST FEARED AND POWERFUL MILITARY COMMANDER?

In late April, Iran ratcheted up its own display of nationalism when it launched a satellite – a move that U.S. officials referred to as a "provocation" given that the Defense Intelligence Agency last year reported that space launch vehicles could be utilized as a proving ground "for developing an ICBM," although military analysts have since argued that Iran's machinery is far too limited to serve as an intercontinental ballistic missile.

"The level of Iranian reprisals thus far certainly has not risen to match the significance of the Soleimani killing, but this should not be seen as an indication that Iran has abandoned its desire to seriously harm U.S. interests in the Middle East," warned Jordan Steckler, research analyst at United Against Nuclear Iran (UANI). "Even the coronavirus has not fully slowed Iran's malign targeting of the U.S. The regime has followed a familiar playbook, continuing external aggression to distract from its own corruption and ineptitude."

In this photo released Wednesday, April 22, 2020, by Sepahnews, an Iranian rocket carrying a satellite is launched from an undisclosed site believed to be in Iran's Semnan province. (Sepahnews via AP)

But according to one Iraqi intelligence source, who requested anonymity due to safety precautions, the assassination of Soleimani has had a profound aftereffect.

"Iran really utilized him as a real foreign policy preacher and enforcer across the entire Middle East and Russia and Afghanistan, he was the real boss and had relationships no one else had," the source explained. "The IRCG is not the same. It's going to take them a long while to build that back up and figure who he knew. He did everything his own way and didn't have to ask permission for anything."

Soleimani's replacement in heading the Iranian Revolutionary Guard Corps (ICRG) elite Quds Force unit is Brigadier General Esmail Ghaani, and experts contend he has so far shown little of the same clout that his predecessor did.

"Esmail Qaani's portfolio was heavily centered on Quds Force operations in Afghanistan and Pakistan," noted Steckler. "His relationships with Syrian, Lebanese, and Iraqi political and militia leaders aren't as strong as Soleimani's were, and we have seen Hezbollah step in to fill that void in the interim as Qaani gains his footing."

The source also stressed that the killing of Iraq's Shiite militia leader Abu, who was alongside Soleimani as they endeavored to depart the Baghdad airport on that fateful Friday night, has had an equally as resounding impact.

"His death was devastating for Iranian interests, he was the head of the snake, and those under him now really don't know what to do," noted the insider. "All the command he built up has gone."

Mourners step over a U.S. flags before burning it during the funeral of Iran's top general Qassem Soleimani and Abu Mahdi al-Muhandis, deputy commander of Iran-backed militias in Iraq known as the Popular Mobilization Forces, in Baghdad, Iraq, Saturday, Jan. 4, 2020. Thousands of mourners chanting "America is the Great Satan" marched in a funeral procession Saturday through Baghdad for Iran's top general and Iraqi militant leaders, who were killed in a U.S. airstrike. (AP Photo/Nasser Nasser)

Several other Iraq officials Fox News spoke to concurred that the effect has been significant.

"The period after the killings has meant a huge split inside the PMF," one Kurdish official said. "They still cannot decide on who to replace Abu Mahdi, Soleimani was the decider for everyone, and he had the final say."

However, the low-level offensive assaults against U.S. interests by the Iranian-backed militias in Iraq remain ongoing, coupled with Tehran's overarching use of its naval vessels in the Persian Gulf – including live-action training exercises earlier this week – have some policymakers calling for the U.S. to implement an even tighter "maximum pressure" campaign.

Furthermore, it circumvented the Trump administration's hardline Venezuelan policy against the regime of Nicolas Maduro this week by sending five tankers of gasoline to the increasingly isolated Latin American country.

On Wednesday, Secretary of State Mike Pompeo announced that all sanctions waivers issued to countries to work with Iran on nuclear projects would be coming to an end within 60 days.

Despite the acrimonious rhetoric between Washington and Tehran, so far, it has amounted to little more than tit-for-tat and a far cry from the doomsday predictions that percolated at the beginning of the year.

"Even under coronavirus crisis conditions, Iran is signaling that it will not be deterred," Taleblu said. "Low-level escalation is set to continue."Others caution that once other distractions such as the coronavirus crisis subside, hostilities could rise again.

"The killing of Soleimani and other 'maximum pressure' tactics have resulted in a more hostile, provocative Iran, not a moderate one. Even though a full-scale war hasn't happened yet, concerns were justified," said Defense Priorities Policy Director, Ben Friedman.  The killing sparked direct U.S.-Iran conflict, including a missile attack on an Iraqi base housing U.S. forces. It was mostly just luck that the attack didn't kill any U.S. soldiers, providing President Trump an off-ramp to back down from further escalation."

But over the next few months, analysts highlighted, there is likely to be a lull. A prominent forthcoming date is Oct. 18, 2020, when the United Nations arms embargo 2231 will expire, freeing Iran to take delivery of state-of-the-art combat aircraft, attack helicopters, warships, and tanks from Russia and China, who are eager to tap into the Iranian defense market.

"While Iran has already violated the arms embargo with seeming impunity, ferrying weaponry to its proxies in combat zones around the region, the resolution has kept the most advanced weaponry out of Iranian hands," added Steckler. "If the resolution lifts, Iran will be able to rebuild its own aging military fleet, and it would strip the U.S. and Israel of justification under international law for its efforts to curtail Iranian arms transfers through interdictions and airstrikes."