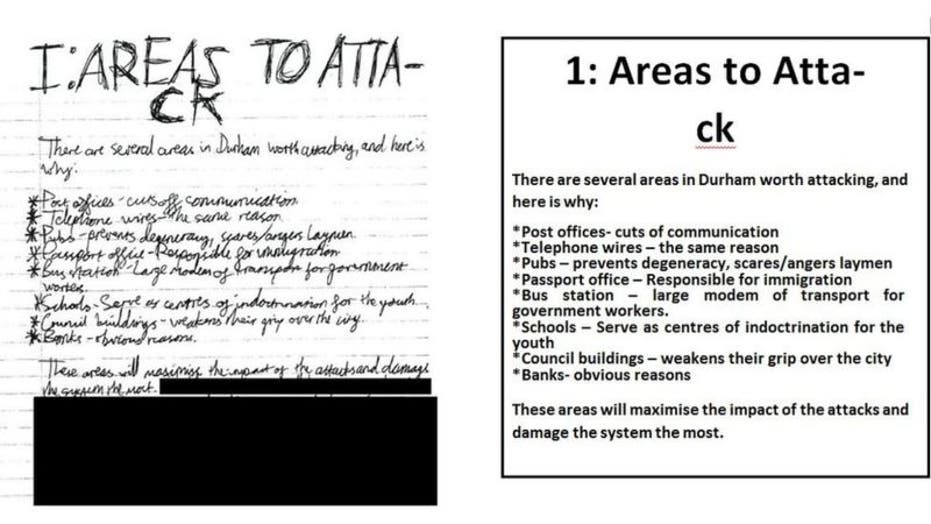 A British neo-Nazi teen who described himself as a “natural sadist” during his trial was sentenced Tuesday to more than six years behind bars for planning a terrorist attack, according to reports.

The 17-year-old, who could not be named for legal reasons, was found guilty last year of planning terrorist acts in the city of Durham between October 2017 and March 2018, making him the youngest person to be convicted for such crimes, BBC reported.

U.K. authorities say a teen kept a "hit list" of places in his community he planned to commit acts of terrorism.  (Counter Terrorism Police NE)

Investigators said the teen had kept a “guerrilla warfare” manual in which he targeted schools, pubs and post offices in his area as potential targets for terrorist acts.

In March 2019, local authorities seized documents from his home, including details of a planned arson campaign against synagogues and a collection of far-right literature, The Guardian reported.

Investigators also said an analysis of his computer and mobile phone devices showed he had extensively researched firearms, explosives and knives.

Prosecutors said during his sentencing at Manchester crown court that the teen had an “admiration” for Adolf Hitler and was fascinated by the 1999 Columbine high school massacre in which two armed teenagers killed 12 students and one teacher.

Judge David Stockdale said it was regrettable that a “young man of high intellect” had gone down “such a twisted and -- many would say sick -- ideological path.”

The teen’s lawyer argued for prosecutors to consider his clients’ apparent autism and young age as having an influence on his behavior.

The teen was sentenced to six years and eight months at Manchester Crown Court followed by five years on license, similar to the American equivalent of being on probation.