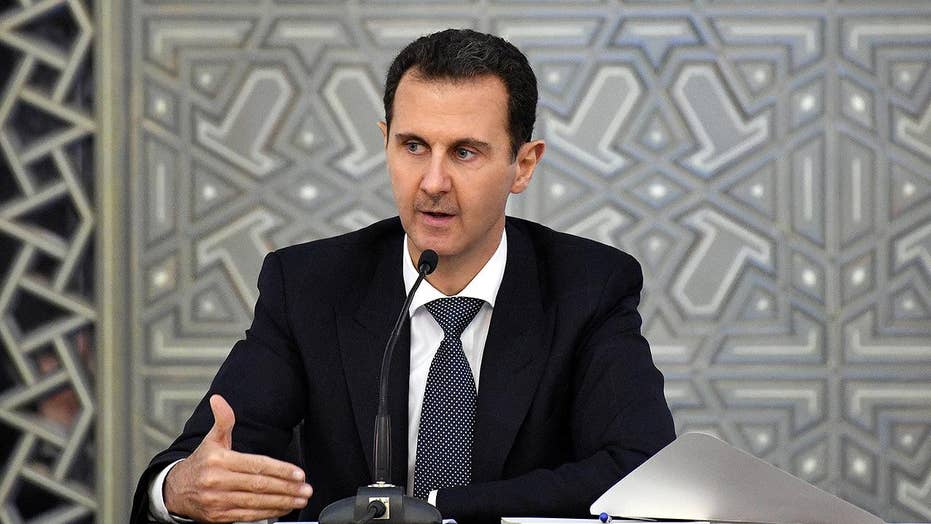 The U.S. government has long imposed sanctions on Syrian President Bashar al-Assad, who has presided over more than nine years of a civil war that has claimed the lives of an estimated half a million people. But for the first time ever, on June 17 his British wife Asma was targeted with economic restrictions of her own.

"We anticipate many more sanctions, and we will not stop until Assad and his regime stop their needless, brutal war against the Syrian people," U.S Secretary of State Mike Pompeo said in a statement. "I will make special note of the designation for the first time of Asma al-Assad, the wife of Bashar al-Assad, who with the support of her husband and members of her Akhras family has become one of Syria's most notorious war profiteers."

In recent years, she has been referred to in the press as everything from the "feminine face of Assad's dictatorship" to "Mrs. Monster" to "Lady Jasmine" — but who exactly is Asma Assad and what role has she played in the bloodletting?

"Asma al-Assad's public roles have been as a propagandist and pseudo-humanitarian, but it is widely understood that she has been more intimately involved with her husband's political decisions," Kenan Rahmani, advocacy manager for Washington-based The Syria Campaign told Fox News. "She has also bolstered the regime's image, feeding into regime propaganda demonstrating her and her husband Bashar as patriotic Syrians inspired by humanity and a duty to serve their people."

Born the eldest child and only daughter of a Syrian cardiologist father and Syrian diplomat mother, Asma Akhras was born into the upper echelons of London society in 1975. Referred to as "Emma" by her friends, the then-Akhras graduated from King's College in 1996 with a bachelor's degree in French literature and computer science before stepping into the fast-paced world of investment banking. But just as she was preparing to take on an MBA at Harvard University, she reconnected with Bashar – an acquaintance who she had met years earlier – and they wed in a secret Damascus ceremony in December 2000.

As a Sunni Muslim marrying into the Assad Alawite leadership, an offshoot of Shiaism, the first couple were considered to be young, fresh reformers who would guide Syria into a new level of advancement and secularism, with Asma actively behind the prohibition of hijabs in educational institutions and visits to churches and other religious minorities.

"When Bashar married a Sunni, that created an impression among the Syrians that a change in the sectarian policy of the regime could take place and play a positive role," said Saad Sharea, member of the board of directors of the Syrian research firm Bakkah Media. "Rather, it was the exact opposite that happened."

The couple went on to have three children — two sons and a daughter born between 2001 and 2004.

Asma also brushed shoulders with Hollywood royalty less than two years before the outbreak of the 2011 revolution.

As described in a widely ridiculed U.S. Vogue profile piece titled "Desert Rose," which was yanked from shelves for its glowing depiction and failure to address her husband's human rights abuses and authoritarian rule, the first lady described hosting Angelina Jolie and Brad Pitt in the ancient capital of Damascus.

Asma, the wife of Syrian President Bashar al-Assad, makes an appearance during a rally in support of her husband in Damascus on Jan. 11, 2012. (REUTERS)

But that all came to an end when her country's swell of peaceful protests in early 2011 turned into a bitter conflict that rages on to this day. And over the course of the past bloody decade, Asma's role has morphed and grown.

In the early months of the uprising, she gave no interviews and made few public appearances. Then in early 2012, the European Union froze her assets and placed her on a travel ban. As a U.K. citizen, Asma is able to visit her land of birth — and thus has been the subject of numerous campaigns and calls for the British Home Office to revoke her citizenship. Some British leaders contend that there is more room for negotiation if she remains a citizen, while others claim she still has a strong lobby of support stemming from her time in banking.

That same year, rumors of marital turmoil began running rampant. Suggestive emails between Bashar and scores of other women were leaked to the press. Asma is said to have used this to her advantage to broker a more significant role in the Damascus fold, cementing her own rise to power and increased public profile.

"In the beginning, she was not in favor of all this killing and mass atrocity, but after those emails were leaked about women in his entourage, we heard she wanted to leave with her children, but the Army did not permit them to go," said Ayman Abdel Nour, a long defected Assad government adviser and president of the nonprofit Syrian Christians for Peace. "Then her father came and struck a deal that she starts playing an active first lady role in the government [and] in exchange she would support the president with her love and smile."

This photo released on the official Facebook page of Syrian Presidency, shows Syrian President Bashar Assad casting his ballot in the parliamentary elections in 2016, as his wife Asma, left, is standing next to him, in Damascus. (AP)

It wasn't until the death of Bashar's mother, the former first lady, that Asma could officially take on the esteemed title, Nour noted.

"After 2016, she became a different person and involved in all the meetings and the government and NGOs," he said.

In August 2018, it was announced that Asma had begun treatment for early-stage breast cancer – her Instagram account became adorned with images of colorful scarves wrapped around her head post-chemotherapy. Almost an exact year after the announcement, she stated she was cancer-free.

While she participated in World Breast Cancer Awareness Day and praised Syrian hospitals for their care, the sentiment did little to improve her international image given that the regime has systemically bombed medical facilities in opposition-held areas throughout the duration of the war.

POMPEO INCREASES BOUNTY ON NEW, SHADOWY ISIS LEADER TO $10M AS RUMORS OF HIS DEATH IN SYRIA SWIRL

Asma's network of charities, notably Syria Trust for Development, have been characterized by some foreign governments as facades for Syrian government financing operations.

"Asma's NGOs have benefited from contracts with UNHCR, UNICEF and UNDP, which have provided millions of dollars to her corrupt charity operation. Syria Trust now runs 15 community centers which siphon money to the regime's pockets, while providing some aid to loyalist communities, further bolstering the Assad regime's image on the ground," Rahmani asserted. "These community centers also run courses about 'effective citizenship' and a highly pro-Assad curriculum. Employees of Syria Trust were fired in 2011, 2012 for pro-freedom or democracy statements."

Syrian President Bashar Assad casts his ballot next to his wife Asma at a polling station during a referendum on the new constitution, in Damascus, Syria, on Feb. 26, 2012. (AP/SANA)

Immediately after being slapped with sanctions, an undeterred Asma and Bashar posed for a photo op with Syrian soldiers on the battlefield, marking Asma's apparent first time near the front lines.

The audacious move may just be the very beginning for the first lady, now 44, who experts anticipate will only amass clout and influence as the regime takes back more and more territory.

"There are many powers who want Bashar gone, but to keep it in the family, she is a possible plan B — part of the female empowerment propaganda," Nour added. "But if there is complete regime change, she and her kids should escape."