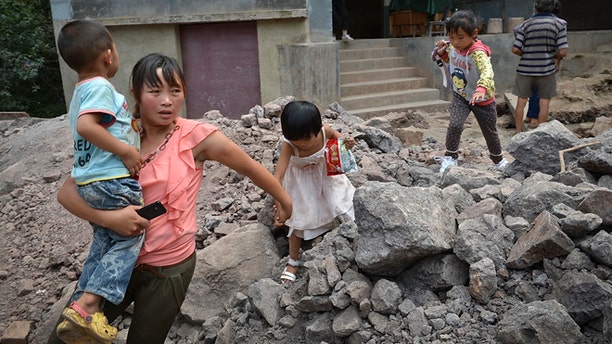 Survivors of a series of earthquakes that killed 81 people and injured more than 800 in a mountainous area of southwestern China were desperately waiting for more aid to arrive Sunday as jolting aftershocks kept fears high and hindered rescue efforts.

The latest victim was a 2-year-old child who was hit by a falling wall as an aftershock struck Saturday night, the state-run Xinhua News Agency reported.

The first earthquakes struck Friday in a region of small farms and mines near the border between Guizhou and Yunnan provinces, where some of China's poorest people live.

They toppled thousands of homes and sent boulders cascading across roads, and authorities evacuated more than 200,000 villagers.

The area was still being jolted by aftershocks Sunday, raising fears of more injuries and fatalities.

Footage from China Central Television showed rescuers and sniffer dogs running past steep slopes because of the risk of fist-sized stones tumbling down. It also showed an ambulance stuck in stones and debris.

Almost all of the 110,000 people who live in Yiliang county's Jiaokui town, about 2 miles from the epicenter of one of the earthquakes, had evacuated, but many had no shelter and were waiting for supplies, a town official said by telephone.

"They are living in the open air now," said the official, who gave only his surname, Xiao. "We are in dire need of tents and quilts. We only received 2,200 tents. Many people have no quilts and are not living in tents."

A resident of Luozehe town, close to where the quakes struck, said he and others were evacuated to a more central area of the county. "It's quite hot here, there isn't enough drinking water or tents," said Wu Xuehong, who described seeing dead livestock after farm buildings collapsed.

More than 11,000 tents, 8,500 quilts, 6,000 coats and other supplies including bottled water and rice have been delivered to Yiliang and more are on the way, Xinhua said, citing the rescue headquarters.

The first magnitude-5.6 quake struck just before 11:30 a.m. Friday and was followed by an equally strong quake shortly after noon. Though of moderate strength, the quakes were shallow. Such quakes often cause more damage than deeper ones.

As of noon Sunday, there had been 279 aftershocks, said Zhang Junwei, spokesman of Yunnan's seismological bureau.

Xinhua quoted Zhou Guangfu, deputy chief of the county's education bureau, as saying that three students were among those who died. He said more than 300 high schools and primary schools were damaged and the education bureau would inspect schools before allowing classes to continue.

In 2008, a massive 7.9-magnitude quake in Sichuan province, just north of Yunnan, left 90,000 dead or missing, including thousands of students whose schools collapsed.

State media reported Saturday that the army and police had mobilized more than 3,200 personnel to help rescue efforts, along with some 4,000 militiamen and reserve forces. That means 11,000 rescuers are attempting to clear roads, evacuate people and search for the missing.