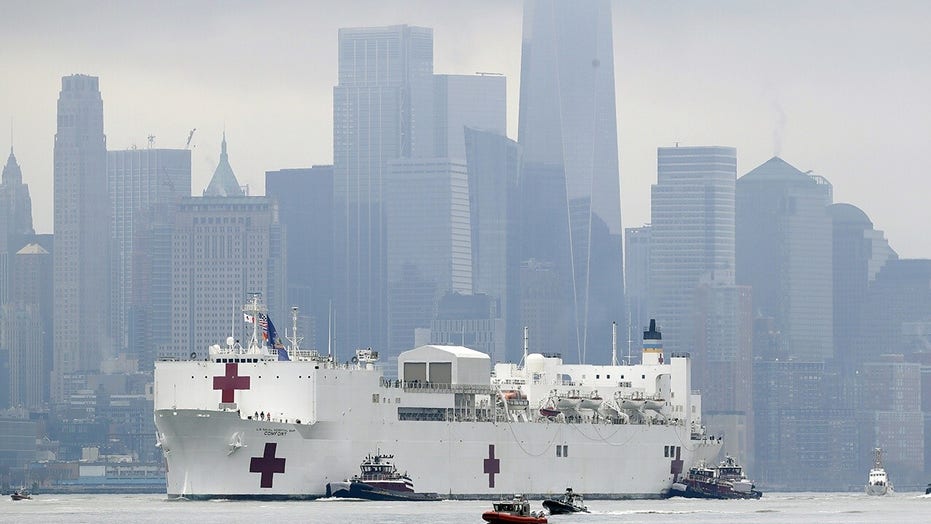 Bryan Llenas reports from the scene at Pier 90 as the Navy hospital ship arrives to treat non-coronavirus patients.

Submariners conducting missions at sea are likely among the last people in the world learning about the coronavirus pandemic turning life upside down back home.

Current and former officers who served aboard France's nuclear-armed subs say mariners aboard ballistic submarines are routinely spared bad news while underwater to encourage undivided focus on their top-secret missions and to avoid undermining their morale.

Any crews that left port before the virus spread around the globe are likely being kept in the dark about the extent of the rapidly unfurling crisis until their return.

"All events that could affect or change the morale of the crew members are kept from them," said Chief Doctor Gabriel. (He spoke to The Associated Press on condition that he be identified only by his first name and rank, in accordance with the rules of his branch of the French military.) "Since there is no Internet, no radio and no television on board, the only news you get comes from messages received by the commander, and the commander filters the messages to not give all of the information to everyone."

Adm. Dominique Salles, who commanded the nuclear-armed French submarine "L'Inflexible," told the AP he believes submariners will likely only be told of the pandemic as they head back to port, in the final two days of their mission.

"They won't know," Salles said. "The boys need to be completely available for their mission."

French submarine missions last 60 to 70 days, with about 110 crew members aboard. A crew that left at the end of February wouldn't be expected back before the end of April. In that case, they will return to a world changed by the pandemic.

On March 1, France had just 130 confirmed COVID-19 cases and two deaths. In under a month, those numbers have surged to over 40,000 sickened and 2,600 dead. For submariners, the return to land will likely be a shock.

Salles said the situation now will be toughest for any crews that leave harbor in the weeks ahead, because they'll know they are leaving loved ones in the midst of the pandemic and, possibly, still living in lockdown. The French government has already extended its stay-home orders once, to April 15, and said it could do so again.

Salles said he believes those crews will get regular coronavirus updates but won't be told of any family deaths until they are returning to the l'Ile Longue submarine base near Brest in Brittany.

"No matter how serious an event is, there is nothing a submariner can do about it. And since he cannot do anything, better that he know nothing," Salles said. "They know that they won't know and accept it. It's part of our deal."