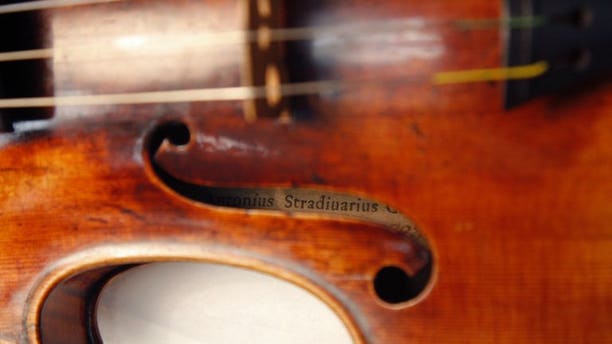 A Stradivarius violin is pictured at the Musee de la Musique in Paris, on December 3, 2009. British police have recovered a rare Stradivarius violin worth ??1.2 million ($1.8 million, 1.4 million euros) that was stolen from its owner in a London railway cafe in 2010. (AFP/File)

Police said Tuesday they have recovered a rare Stradivarius violin worth ??1.2 million that was stolen from its owner in a London railway cafe in 2010.

Thieves took the antique instrument, which was made in 1696, and two bows from Korean-born violinist Min-Jin Kym as she ate at London's Euston station.

It was recovered from a property in the Midlands last week, police said, without giving further details. Three people were jailed in connection with the theft in 2011.

"It's been a very difficult journey, I still can't quite believe what has happened," said the 34-year-old violinist after the instrument was returned to her.

"The loss of the instrument, and the acute responsibility I felt, was at the back of my mind at every moment of the day. I'd played the instrument since I was a teenager, so it'd been a huge part of my identity for many years."

Police said the violin was discovered intact with very minor damage. It was found in its case along with a missing ??62,000 Peccatte bow and a bow by the School of Bazin worth ??5,000.

The discovery comes after a false lead in March this year when police thought the violin had turned up in Bulgaria, only for it to be revealed as a fake around a century old.

This time antiques experts have verified the find.

Detective Simon Taylor, who led the hunt for the Stradivarius, said he was "delighted".

"I always maintained that its rarity and distinctiveness would make any attempt to sell it extremely difficult, if not futile, because established arts and antiques dealers would easily recognise it as stolen property," he said.

Violins made by Italian Antonio Stradivari (1644-1737), considered by many the world's most important luthier or crafter of stringed instruments, are extremely rare and valuable. There are probably no more than 600 still in existence.