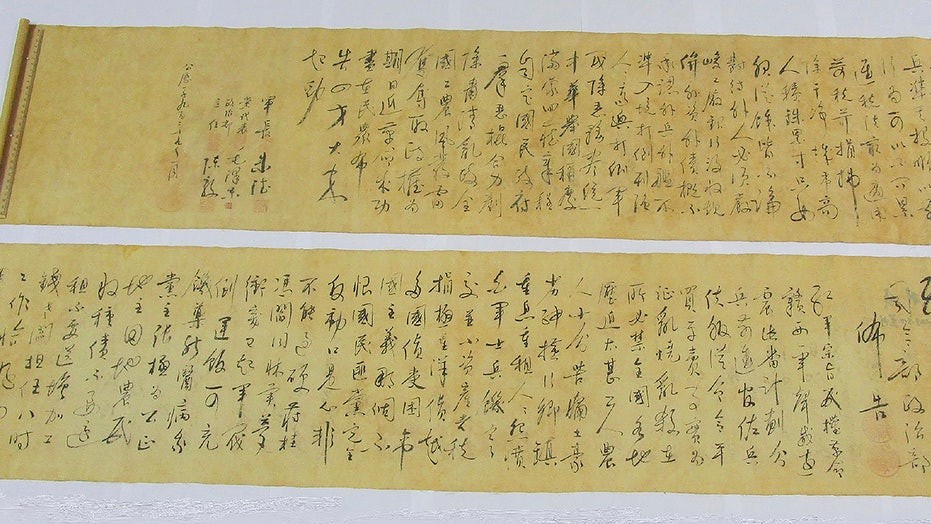 A stolen 9-foot calligraphy scroll believed to be written by former Chinese communist leader Mao Zedong has been found cut in half, Hong Kong police said.

The artwork, worth about $296.7 million, was taken from collector Fu Chunxiao's home last month while he was stuck in mainland China due to the coronavirus pandemic. The thieves also took off with six other scrolls, 24,327 Chinese postage stamps, and 10 copper coins worth about $588 million.

After the Mao scroll was stolen, it was bought for about $58 by a man who thought it was a fake. The man also believed the scroll was too long to display so he cut it in half, Tony Ho, superintendent of Hong Kong's organized crime and triad bureau said.

The person who bought the artwork turned himself in on Sept. 22 when he heard about the burglary case and a public appeal by the police. He was arrested on suspicion of handling stolen property. He has since been released on bail.

Hong Kong police on Tuesday arrested one of the three alleged suspects in the high-price heist. The South China Morning Post reported police have identified the two other suspects but have not released any additional information.

Fu said he had planned on donating the calligraphy piece before the burglary but didn't say where.

"I have not made a decision as to how to deal with it, [and won't] until I get it back," he said.