State Department warns against travel to Bolivia amid unrest

The State Department Tuesday warned Americans not to travel to Bolivia "due to civil unrest" in the South American country days after socialist president Evo Morales was forced to resign amidst accusations of election fraud.

BOLIVIA EX-LEADER CLAIMS TO HAVE SPENT NIGHT AFTER RESIGNING LYING ON FLOOR UNDER BLANKET, LANDS IN MEXICO 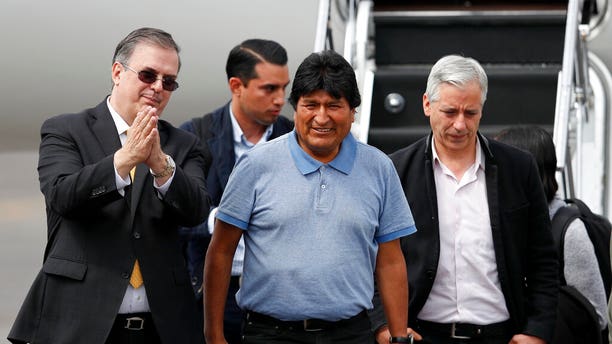 "The U.S. government has limited ability to provide emergency services to U.S. citizens in Bolivia," the statement went on. "There are recurring demonstrations, strikes, roadblocks, and marches in major cities in Bolivia," the State Department said in a statement on Tuesday. "Roadblocks and strikes cut off traffic on main avenues, highways between cities, and airport access.  Protestors in major cities are intermittently occupying or blocking access to public institutions and infrastructure, denying access to transportation hubs, banks, and other services. Some protests have resulted in violent confrontations, and local authorities have used crowd control measures to discourage protests."

Morales resigned Sunday after more than 14 years in power and flew to exile in Mexico earlier Tuesday. He had declared victory in the Oct. 20 presidential elections, only to see thousands of protesters take to the streets. The demonstrations led to three deaths, hundreds of injuries, police defections and finally a call from the chief of the military for Morales to resign. 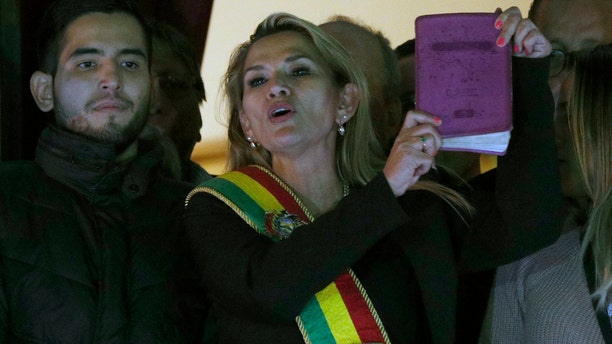 Opposition politician Jeanine Anez addresses the crowd from the balcony of the Quemado palace in La Paz after she declared herself interim president of Bolivia Tuesday. (AP Photo/Juan Karita)

The 60-year-old stepped down soon after an Organization of American States audit reported widespread irregularities in the vote count.

Jeanine Añez, 52, a women's rights activist and former television presenter who became an opposition leader in the Senate declared herself Bolivia's interim president late Tuesday even though she lacked a quorum to appoint her there was no quorum for a formal debate on accepting Morales' resignation, and no one swore her in. Lawmakers from Morales' Movement for Socialism boycotted the assembly session.

In a dramatic scene Monday, Añez wept as she told journalists that she wanted to "give certainty" to Bolivians in the midst of a power vacuum.

"I just want to provide a solution to the horrible crisis that we're living through," Añez said.

If it stands up, Añez's self-proclamation would make her the second woman to become interim president of Bolivia. Lidia Gueiler held that role in 1979 and 1980.