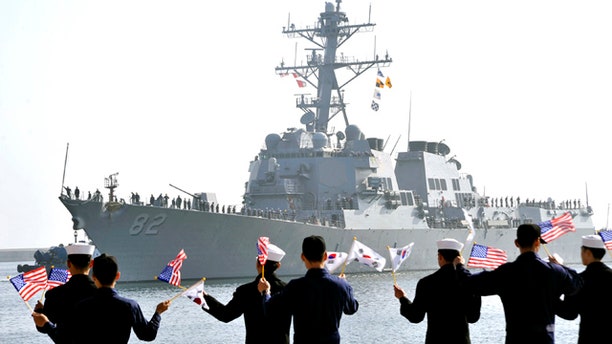 North Korean state media said Monday that Pyongyang had carried through with a threat to cancel the 60-year-old armistice that ended the Korean War, as it and South Korea staged dueling war games amid threatening rhetoric that has risen to the highest level since North Korea rained artillery shells on a South Korean island in 2010.

Enraged over the South's joint military drills with the United States and recent U.N. sanctions, Pyongyang has piled threat on top of threat, including vows to launch a nuclear strike on the U.S. Seoul has responded with tough talk of its own and has placed its troops on high alert.

The North Korean government made no formal announcement Monday on its repeated threats to scrap the armistice, but the country's main newspaper, Rodong Sinmun, reported that the armistice was nullified Monday as Pyongyang had earlier announced it would.

The North followed through on another promise Monday, shutting down a Red Cross hotline that the North and South used for general communication and to discuss aid shipments and separated families' reunions.

The drills are held annually, and this year, according to South Korean media, the "Key Resolve" drill rehearses different scenarios for a possible conflict on the Korean peninsula using computer-simulated exercises. The U.S. and South Korean troops will be used to test the scenarios.

Also continuing are large-scale North Korean drills that Seoul says involve the army, navy and air force. The South Korean defense ministry said there have been no military activities it considers suspicious.

The North has threatened to nullify the armistice several times in times of tension with the outside world, and in 1996 the country sent hundreds of armed troops into a border village. The troops later withdrew.

Despite the heightened tension, there were signs of business as usual Monday.

The two Koreas continue to have at least two working channels of communication between their militaries and aviation authorities.

One of those hotlines was used Monday to give hundreds of South Koreans approval to enter North Korea to go to work. Their jobs are at the only remaining operational symbol of joint inter-Korean cooperation, the Kaesong industrial complex. It is operated in North Korea with South Korean money and knowhow and a mostly North Korean work force.

Analysts said that much of the bellicosity is meant to shore up loyalty among citizens and the military for North Korea's young leader, Kim Jong Un.

"This is part of their brinksmanship," said Daniel Pinkston, a Seoul-based expert on North Korea with the International Crisis Group think tank. "It's an effort to signal their resolve, to show they are willing to take greater risks, with the expectation that everyone else caves in and gives them what they want."

Part of what North Korea wants is a formal peace treaty to end the Korean War, instead of the armistice that leaves the peninsula still technically in a state of war. It also wants security guarantees and other concessions, direct talks with Washington, recognition as a nuclear weapons state and the removal of 28,500 U.S. troops stationed in South Korea.

Pinkston said there is little chance of fighting breaking out while war games are being conducted, but he added that he expects North Korea to follow through with a somewhat mysterious promise to respond at a time and place of its own choosing.

Among other threats in the past week, North Korea has warned Seoul of a nuclear war on the divided peninsula and said it was cancelling nonaggression pacts.

South Korean and U.S. officials have been closely monitoring Pyongyang's actions and parsing its recent rhetoric, which has been more warlike than usual.

One analyst said Kaesong's continued operations show that North Korea's cutting of the Red Cross communication channel was symbolic. More than 840 South Koreans were set to cross the border Monday to Kaesong, which provides a badly-needed flow of hard currency to a country where many face food shortages, according to Seoul's Unification Ministry.

Under newly inaugurated President Park Geun-hye, South Korea's Defense Ministry, which often brushes off North Korean threats, has looked to send a message of strength in response to the latest comments from Pyongyang.

The ministry has warned that the North's government would "evaporate from the face of the Earth" if it ever used a nuclear weapon. The White House also said the U.S. is fully capable of defending itself against a North Korean ballistic attack.

On Monday, Park told a Cabinet Council meeting that South Korea should strongly respond to any provocation by North Korea. But she also said Seoul should move ahead with her campaign promise to build up trust with the North.

North Korea has said the U.S. mainland is within the range of its long-range missiles, and an army general told a Pyongyang rally last week that the military is ready to fire a long-range nuclear-armed missile to turn Washington into a "sea of fire."

While outside scientists are still trying to determine specifics, the North's rocket test in December and third atomic bomb test last month may have pushed the country a step closer to acquiring the ability to hit the U.S. with weapons of mass destruction. Analysts, however, say Pyongyang is still years away from acquiring the smaller, lighter nuclear warheads needed for a credible nuclear missile program.

But there are still worries about a smaller conflict, and analysts have said that more missile and nuclear tests are possible reactions from North Korea.

North Korea has a variety of missiles and other weapons capable of striking South Korea. Both the warship sinking and island shelling in 2010 occurred near a western sea boundary between the Koreas that North Korea fiercely disputes. It has been a recurring flashpoint between the rivals that has seen three other bloody naval skirmishes since 1999.

Kim was also quoted as saying his military is fully ready to fight an "all-out war" and that he will order a "just, great advance for national unification" if the enemy makes even a slight provocation, according to the North's official Korean Central News Agency.