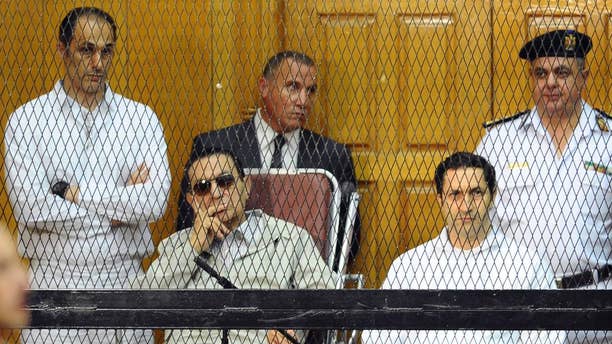 FILE - In this file photo taken Saturday, Sept. 14, 2013, former Egyptian President Hosni Mubarak, seated left, and his two sons, Gamal Mubarak, far left, and Alaa Mubarak attend a hearing in a courtroom at the Police Academy, Cairo, Egypt. The sons of Mubarak were ordered released on bail Thursday, Jan. 22, 2015, pending a retrial in the last case that was keeping them behind bars, opening the door for the release of the two for the first time since they were incarcerated in the wake of their father’s ouster in 2011. (AP Photo/Mohammed al-Law, File) (The Associated Press)

It is not clear when the Mubaraks will walk free. The court decision Thursday was not immediately implemented. A security official said time must be allowed for the prosecution to decide whether to appeal. There are also no legal grounds for the continued detention of Mubarak or his sons.

Alaa and Gamal Mubarak were sentenced to four years in prison on charges of using state funds to renovate family residencies. Their father got three years in the case.

The sentences were overturned earlier this month. The two sons face another trial on charges of insider trading, and another court had ordered their release pending trial.