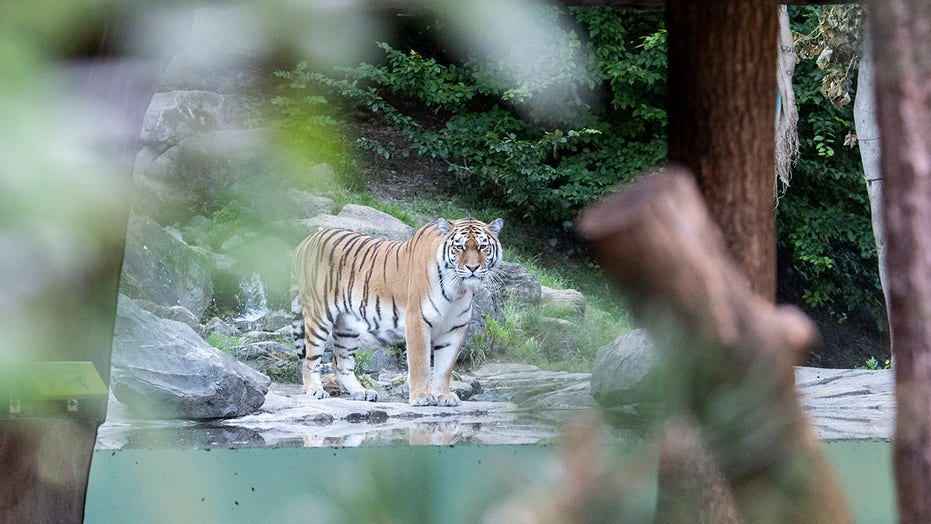 A Siberian tiger killed a Swiss zookeeper inside an enclosure on Saturday as horrified visitors watched, officials said.

Onlookers called for help after the big cat began attacking the keeper around 1 p.m. local time, the Zurich zoo said in a statement. Staff rushed to their colleague’s aid and lured the Siberian tiger, named Irina, out of the enclosure. First responders tried to revive the keeper.

'CATASTROPHIC' ELEPHANT DEATHS MYSTERY: HUNDREDS HAVE DROPPED DEAD IN BOTSWANA, AN NO ONE KNOWS WHY

Irina was born in 2015 at a zoo in the Danish city of Odense and transferred to Zurich a year ago. Zurich zoo director Severin Dressen said the tiger behaved normally before the attack.

Two adult Amur tigers live in the tiger enclosure at Zoo Zurich: the five-year-old female Irina and the four-and-a-half-year-old male Sayan, pictured above after the attack Saturday. (Ennio Leanza/Keystone via AP)

An investigation is underway to determine why the keeper was in the enclosure at the same time as the tiger, Hoedl said.

Dressen said the keeper had been a long-term member of the zoo staff.

“Our full sympathy is with the relatives of the victim," he said.

The zoo called the incident "extremely tragic," but noted that the attack was part of Irina's "natural instincts" as a wild animal dealing with an intruder in her territory. Therefore, the zoo said, the tiger would face no consequences for the attack.

Visitors and colleagues who witnessed the attack were receiving psychological counseling, he said.

The zoo, which only recently reopened following a coronavirus-related shutdown, remained closed Sunday. It is expected to reopen Monday, although the tiger complex will remain closed.