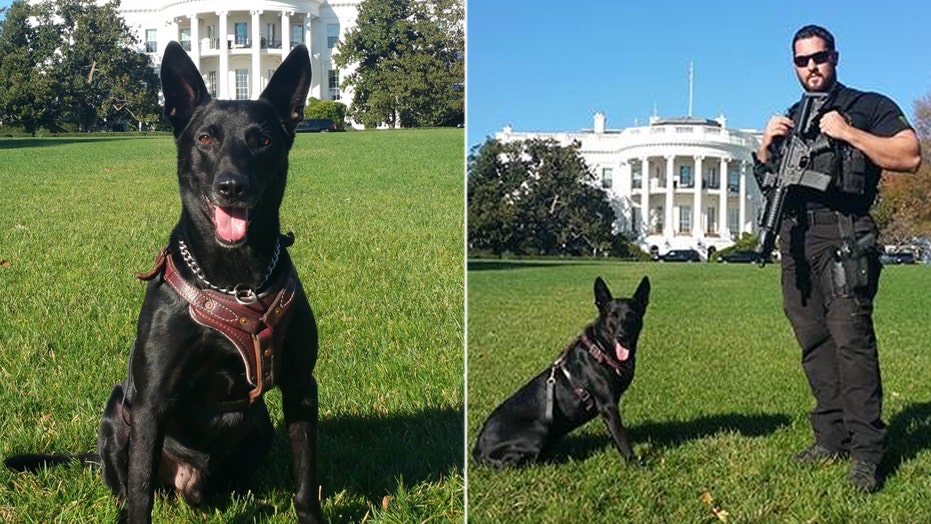 A dog who is credited with saving former President Barack Obama from an intruder at the White House will be honored for his heroism.

"Hurricane," a former U.S. Secret Service dog, will be awarded the Order of Merit from PDSA, a British veterinary charity that equates the honor with the "OBE," or "Order of the British Empire," during a special ceremony in London in October. He will be the first-ever foreign animal to receive the award.

SERVICE DOGS TRAVEL TO EL PASO TO COMFORT VICTIMS AND FIRST RESPONDERS: 'THESE DOGS CAN REACH PLACES IN THE HEART NO HUMAN CAN'

The four-legged hero stopped an intruder who in October 2014 scaled a White House fence. The intruder swung Hurricane around, and punched and kicked him — but the dog dragged the man to the ground, allowing Secret Service agents to intercept him, the PDSA explained in a news release. Obama, who was home at the time, was not harmed.

Hurricane was credited with assisting Secret Service agents to stop an intruder at the White House in October 2014.  (U.S. Secret Service)

Hurricane's handler, Marshall Mirarchi, who worked with the Belgian Malinois for four years, described the dog as a "legend" within the Secret Service after the attack.

“He loved working and his talent for the job impressed me every single day. That night, he stepped up and delivered under circumstances that no amount of training could prepare him for," Mirarchi told the PDSA. "I have never witnessed such violence toward a dog before but it didn’t stop him from doing his job."

His reward that night for his heroic behavior was two McDonald's cheeseburgers — the first human food the handler had ever given Hurricane — that he devoured in just a few bites, Mirarchi told Maria Goodavage, author of the book, "Secret Service Dogs: The Heroes Who Protect the President of the United States."

Mirarchi said Hurricane didn't have obvious signs of trauma after the attack, but did have "some cuts and significant bruising," and that ultimately, injuries stemming from the incident contributed to Hurricane's retirement in 2016.

“He had an outstanding career with the U.S. Secret Service, and went above and beyond the call of duty when an intruder tried to gain access to the White House," Jan McLoughlin, director-general of PDSA, said in a statement. "Despite suffering a ferocious assault he never faltered from his duty."