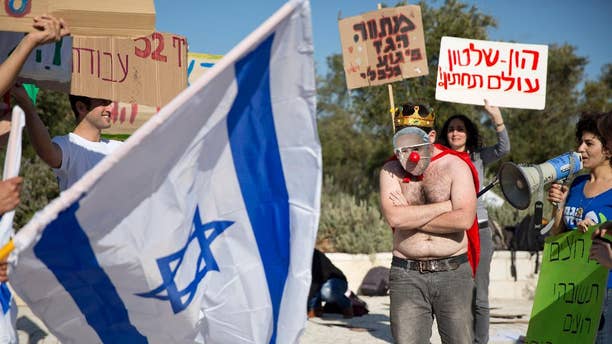 File - In this Sunday, Feb. 14, 2016 file photo, an activist wears a mask bearing a portrait of Prime Minister Benjamin Netanyahu during a protest against a natural gas deal signed in December, 2015 with U.S. and Israeli developers for drilling offshore gas deposits, in front of the Supreme Court in Jerusalem. Israel's Supreme Court has ruled against the governments framework deal for its natural gas reserves granting a year for issues to be worked out on Sunday, March 27, 2016. (AP Photo/Ariel Schalit, File) (The Associated Press)

Israeli and American energy companies controlling Israel's natural gas say they are dissatisfied with a ruling the day before by Israel's Supreme Court that struck down a government deal to begin pumping from offshore deposits.

David Stover, the chairman of Houston-based Noble Energy, said on Monday that the ruling is "disappointing."

Prime Minister Benjamin Netanyahu had emphatically supported the deal struck between his government and a consortium of gas developers as a path to Israeli energy independence and billions of dollars in revenue. Critics said the deal gave too much profit to corporations at the public's expense.

The court opposed a clause that would prevent Israel from making significant regulatory changes for the next ten years.

The Israeli Delek Group called Monday on the government to rework the agreement quickly.