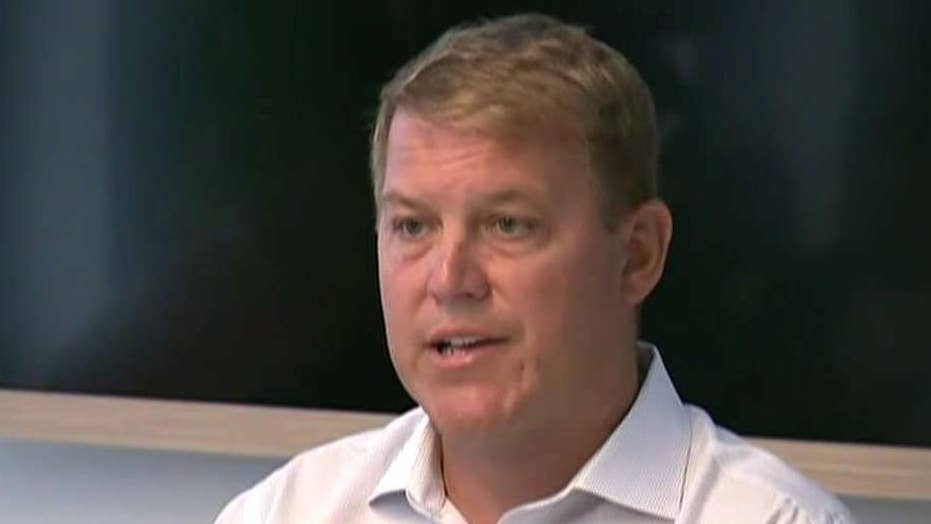 Scott Hapgood claims he killed Kenny Mitchel to defend his family and he hopes to clear his name; David Lee Miller reports from New York.

The attorney of an American man facing manslaughter charges in the death of a resort worker in Anguilla says prosecutors are knowingly putting her client's life in danger by demanding he show up in person to every procedural hearing despite credible threats against him.

UBS trader Scott Hapgood, 44, was charged in the April death of Kenny Mitchel, 27. Hapgood claims self-defense but some on the Caribbean island believe he did it on purpose and were outraged when he was allowed to leave on a $74,000 bond. They believe he has gotten preferential treatment because he is a wealthy, white Westerner.

His lawyer, Juliya Arbisman, said Hapgood has been threatened and that "we were advised, in the context of a security warning by police authorities, that the less time in Anguilla he spends, the better."

Arbisman is upset that a request to have Hapgood attend numerous procedural hearings related to his case via video conference was denied.

"It is cruel and unreasonable justice to drag someone into the jurisdiction, to put them in harm's way, simply because there's a power to do so," she said during a press conference Tuesday. "On the one hand, you say there are credible security threats and on the other hand require him to appear in person not one but three times in one week. Why?"

"It is cruel and unreasonable justice to drag someone into the jurisdiction, to put them in harm's way, simply because there's a power to do so."

Arbisman said that Anguillan authorities gave Hapgood an Osman warning. Named after the high-profile case, Osman v United Kingdom, an Osman warning is given by police or legal authorities to a possible victim if there has been a threat of death or high risk of murder.

"If you cannot guarantee his safety we urge you not to require his physical attendance at every procedural hearing," she said Monday during a press conference.

Hapgood was back in the British territory Thursday to attend a hearing where the prosecutor is expected to ask for additional time because he is not ready to proceed with the case.

For his part, Hapgood told reporters Monday that he wants the truth to come out in the case.

"A great deal of misinformation and outright falsehoods have surrounded this story and I am hopeful that when the real story is presented to the public, the people of Anguilla will understand how this tragic event unfolded," he said.

Hapgood said he was vacationing with his family and was attacked at knifepoint by Mitchel.

"All that I did was defend my young daughters in front of an attacker that was crazed and desperate and I have to just hold onto that fact," he said. "I would do it again and thank God I was in the room when he came."

After the April 13 incident, a spokesperson for Hapgood said Mitchel "showed up unannounced in uniform at the hotel room around 4 p.m., claiming he was there to fix a broken sink before carrying out his sudden, violent attack."

Hapgood's family claims he was stabbed several times and had bruises over his arms and chest. Family spokeswoman Kelcy Kitner also claimed Mitchel was alive the last time Hapgood saw him.

Mitchel's autopsy showed he was beaten and choked to death. A toxicology report, which was withheld from Hapgood's lawyer for three months, revealed Mitchel had cocaine, marijuana and other drugs in his system. His blood-alcohol level was two times the legal limit in the U.S.

Hapgood says he is ready to prove his innocence.

"We have a long road ahead of us but I am looking forward to someday getting back to the life we once had," he said.