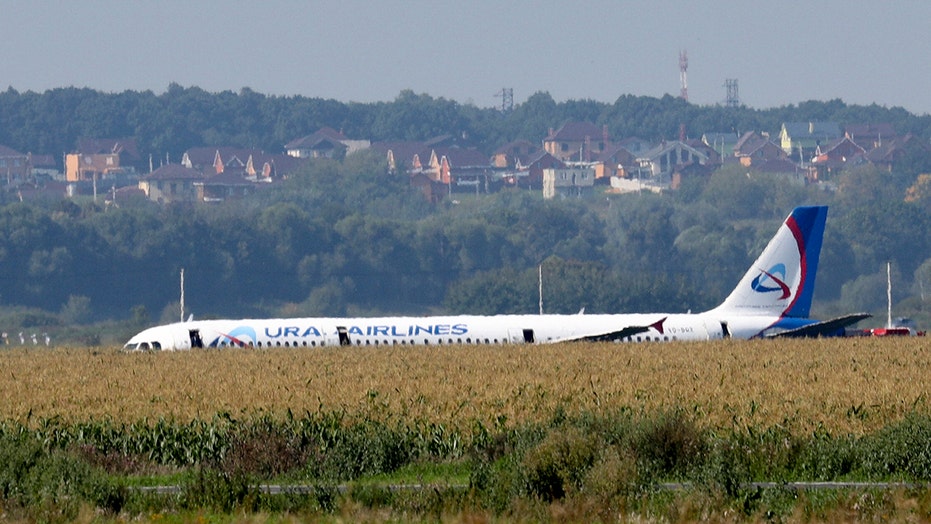 A Russian airliner carrying 226 passengers made an emergency landing in a cornfield outside Moscow's  Zhukovsky International Airport on Thursday after hitting a flock of birds during take-off, causing both engines to malfunction, according to the airline.

Ural Airlines pilot Damir Yusupov was called a “hero” by Russian media for successfully landing the plane with the engines off and the landing gear up, according to Reuters.

The Ministry of Health said 23 passengers suffered mostly minor injuries in the landing, which state television dubbed the “miracle over Ramensk” in a reference to 2009’s “Miracle on the Hudson" near New York City.

A Russian Ural Airlines' A321 plane is seen after an emergency landing in a cornfield near Ramenskoye, outside Moscow, Russia, Thursday, Aug. 15, 2019. (Associated Press)

A passenger told state TV that lights started flashing and there was a smell of burning before they landed, according to Reuters.

Ural said the pilot of the Crimea-bound flight was highly experienced and had logged more than 3,000 flying hours.

In May, 41 passengers died when a flight from a different Russian airline carrying 78 people crash-landed at Moscow's Sheremetyevo Airport and burst into flames.