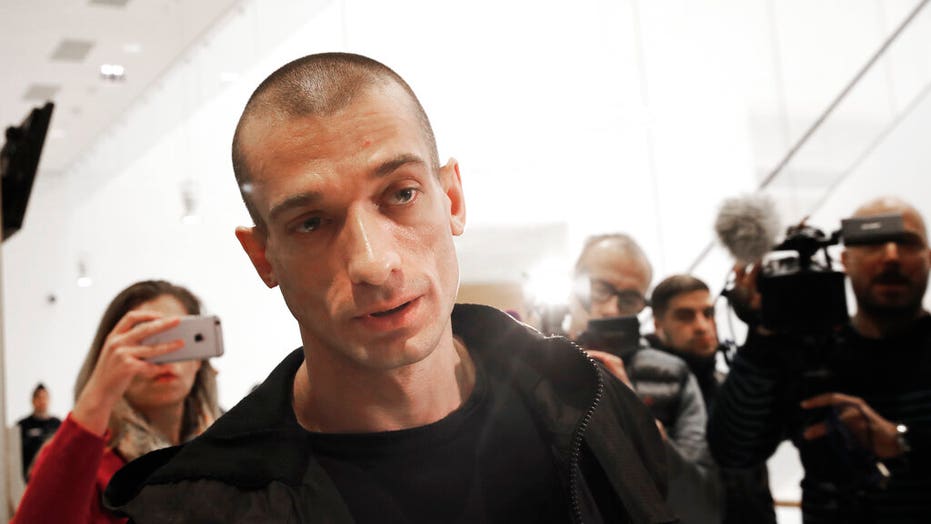 French authorities on Saturday detained a Russian artist who has claimed responsibility for releasing a sex tape that brought down Emmanuel Macron’s preferred candidate in the Paris mayoral race.

Pyotr Pavlensky, who left Russia in 2017 after being told of rape accusations against him, was questioned at a police station on Paris' Left Bank about a separate case involving "violence with a weapon" on New Year's Eve, the Paris prosecutor's office said.

FILE: Russian performance artist Pyotr Pavlensky arrives at the Paris courthouse, as he goes on trial after he set fire to the facade of France's central bank in Paris.  (AP)

Benjamin Griveaux, a former government spokesperson and member of Macron’s La République En Marche party, quit the mayor's race after images surfaced Thursday of an online chat that included a video of a man's genitals.

The prosecutor's office said Griveaux filed a complaint Saturday for an invasion of his private life, and an investigation was opened.

The circumstances surrounding his dropping out sent shock waves through the French political establishment. On Sunday, France's Minister of Health Agnes Buzyn announced she would replace Griveaux as the La République En Marche party's candidate for mayor, Euronews reported.  The two-round election begins in a month.

The mayor of Paris is a high-profile job that Macron's party was counting to win. But Griveaux had been struggling in the race, with polls showing him in third place.

Paris mayoral candidate Benjamin Griveaux gives a press conference as part of the campaign for the upcoming mayoral elections to be held on March, 15, 2020. (AP)

Pavlensky has had trouble with the law before. He was convicted in January 2019 of setting fire to a Bank of France branch and damaging its facade in 2017. He was sentenced to a year in prison, plus a two-year suspended sentence. However, the judge allowed Pavlensky to walk free because he had already spent 11 months in pretrial detention.

Pavlensky created a special site to post the explicit video material, believed to have been extracted from cellphone exchanges.

Pavlensky was quoted on Friday as saying he carried out the action to denounce what he claimed was the "hypocrisy" of Griveaux, who often spoke publicly about his partner and children. He told French media that Griveaux was "a candidate who has lied to his electors" and "very dangerous" for Paris.