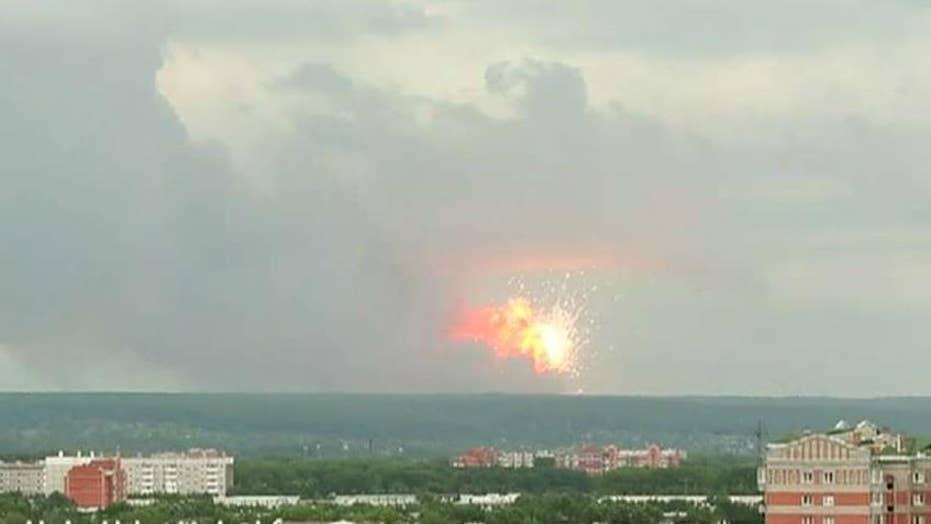 Russia's military appeared to do an about-face Tuesday after telling residents of a village near a navy testing range to evacuate after a mysterious explosion, only to cancel the order hours later.

The decision added to the uncertainty surrounding the incident as local officials claimed soil samples showed that radiation levels have not risen after the blast.

The deadly explosion nearly a week ago took place at a military shooting range in Nyonoksa, located in the far northern Arkhangelsk region.

Russia's state weather agency, Rosgidromet, revealed Tuesday that radiation levels had spiked by four to 16 times after the accident in the port city of Severodvinsk, located about 12 miles from the military testing range. Local authorities in Severodvinsk, a city of 183,000, initially reported a brief spike in radiation levels after the explosion but claimed it didn't pose any health hazards.

But by Tuesday, Russia's military told residents in Nyonoksa, a village of about 500, to leave as part of an evacuation already planned due to unspecified activities at the test range. Hours later, however, the military said the planned activities were canceled and residents were allowed to stay home, Severodvinsk regional administration told the Associated Press.

A resident of Nyonoksa told local news outlet TV29.ru that locals are frequently told to leave the area, according to the Moscow Times.

“It happens regularly — about once per month — and everybody is evacuated from the village," the man was quoted as saying.

Russia's Defense Ministry initially said the blast killed two people and injured six, but the state-controlled nuclear agency, Rosatom, later disclosed that the explosion killed five of its workers and injured three others. Nearly a week after the blast, it's still not clear what the final death toll is.

After Thursday's missile explosion, the Severodvinsk city administration said the radiation level rose to 2 microsieverts per hour for about 30 minutes before returning to the area's natural level of 0.1 microsieverts per hour. Emergency officials issued a warning to all workers to stay indoors and close the windows, while fearful residents rushed to buy iodine pills, which can help limit the damage from exposure to radiation.

By Wednesday, local emergency officials said after taking ground samples from around the area, laboratory analysis has found no trace of radioactive contamination, the TASS news agency reported.

"Over all these days, the natural background in the cities of Arkhangelsk, Severodvinsk and Novodvinsk, in the Primorsky and Onezhsky districts has stayed within normal levels," a statement said.

One of the world's most respected missile experts, Director of East Asia Nonproliferation Program Jeffrey Lewis, said Tuesday the U.S. tried to develop a similarly powered cruise missile in the 1950s and 60s but abandoned the project because it didn't make sense to put a nuclear reactor inside a missile.

“It was a technological nightmare and an ecological hazard,” Lewis told Fox News. “This is not a technology that I think makes a lot of sense for the United States. For whatever reason, the Russians have a different sense, maybe because they treat environmentalists differently than we do in the United States."

Lewis said from the shape of the cruise missile, it appears that it flies subsonic, below the speed of sound, and is "more like an airplane."

"I am not sure this system is ever going to work,” he added.