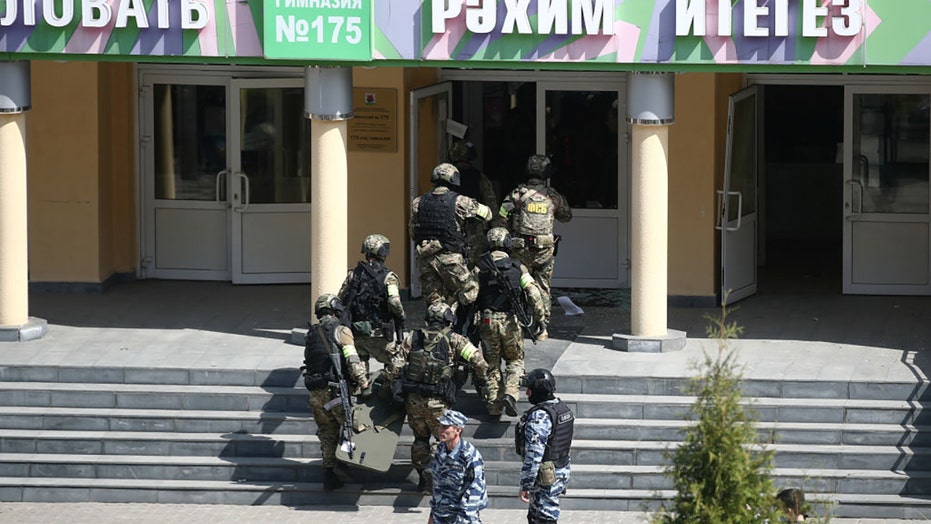 At least eight people were killed and 21 were injured Tuesday in a shooting at a school in southwest Russia, according to reports.

Local media reported that one or more unidentified attackers opened fire at the school in the Russian city of Kazan.

"The terrorist has been arrested, (he is) 19 years old. A firearm is registered in his name. Other accomplices haven't been established, an investigation is underway," Minnikhanov said after visiting the school on Tuesday.

Officers by the Russian school where two attackers reportedly opened fire on May 11, 2021. (Photo by Yegor AleyevTASS via Getty Images)

At least 21 people were hospitalized after the shooting, including 18 children, according to Tatarstan health officials. They added that six of the children hospitalized were in intensive care.

Videos posted on social media appeared to show people jumping out of windows to apparently escape the shooting.

Footage also showed dozens of ambulances lined up in front of the entrance to the school.

School shootings in Russia are rather rare. However, in recent years there have been several violent attacks on schools, mostly carried out by students.

Kazan is a city located on the banks of the Volga and Kazanka rivers in southwest Russia.