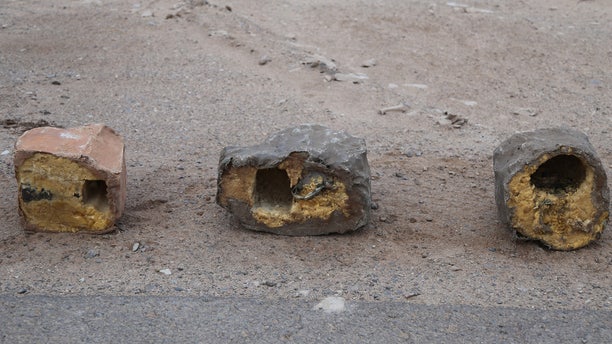 In this undated photograph provided by Conflict Armament Research, an independent London-based group that researches battlefield weaponry, three explosives disguised as rocks are on display in Yemen. (AP)

Roadside bombs disguised as rocks in Yemen bear similarities to others used by Hezbollah in southern Lebanon and by insurgents in Iraq and Bahrain, suggesting at the least an Iranian influence in their manufacture.

The report by Conflict Armament Research comes as the West and United Nations researchers accuse Iran of supplying arms to Yemen’s Shiite rebels known as Houthis, who have held the country’s capital since September 2014.

Those weapons allegedly included ballistic missiles used to target Saudi Arabia, which leads a military coalition of Arab nations backed by the US that is stuck in a stalemate war with the Houthis. A barrage of Houthi missile fire late Sunday killed one person in Riyadh and wounded two others.

Iran has long denied supplying arms to the Houthis, and its mission to the United Nations is dismissing the new report. Iranian Foreign Minister Mohammad Javad Zarif has derided such weapons research as “fabricating evidence.”

The report is just the latest sign of how the conflict in Yemen, the Arab world’s poorest country where over 10,000 people have been killed, has changed from a civil war to a proxy fight among Mideast rivals. The Saudi-led war there turned three years old Sunday. 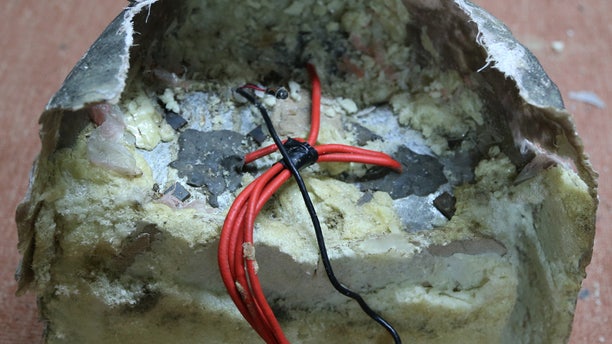 An explosive disguised as a rock is on display in Yemen. (AP)

“What we’re hoping this does is make plausible deniability not very plausible,” said Tim Michetti, head of regional operations for Conflict Armament Research. “You can’t really deny this anymore once the components these things are made with are traced to Iranian distributors.”

Michetti’s organization, an independent watchdog group that receives funding from the United Arab Emirates, Germany and the European Union to research weaponry recovered in Yemen, said it examined a fake rock bomb in January near Mokha, some 250 kilometers (150 miles) southwest of the capital, Sanaa.

The fiberglass-encased bomb, packed with explosives, could be armed by radio and triggered by an infrared beam, the group said. It said there were three varieties, including anti-personnel mines and so-called explosively formed projectiles, which can penetrate armored vehicles and were used with lethal effect against US troops following the 2003 invasion of Iraq.

Electrical circuitry in the bombs mirrored those manufactured by militants in Bahrain, while the bombs bore markings suggesting one workshop mass-produced the explosives, the report said. Such bombs, however, have yet to be used in Bahrain, an island kingdom off Saudi Arabia in the midst of a crackdown on all dissent.

It said independent experts also examined the explosives. Those experts said that “construction indicates that the bomb maker had a degree of knowledge in constructing devices that resembled, and possibly functioned in a manner similar to (explosively formed projectile bombs) that have been forensically tied to Iran and Hezbollah,” the report said.

Alireza Miryousefi, a spokesman for Iran’s mission to the United Nations, dismissed the report, saying the Houthis had no need for such weapons as they control stockpiles of arms purchased under former Yemeni President Ali Abdullah Saleh. The Houthis killed Saleh, their one-time ally, in December.

“President Saleh was the sweetheart of America and Saudi Arabia,” Miryousefi told The Associated Press. “It seems petro-dollars are promoting such reports in order to rationalize war crimes in Yemen as well as the oppression of Bahrain’s completely civil and popular protests.”

Told of the Iranian response, Michetti invited officials from Tehran to take part in his organization’s research in the future.

This is not the first time Iran has been accused of arming the Houthis.

The US Navy’s 5th Fleet, based in Bahrain, has repeatedly said Iran sends arms into Yemen. It points to seizures over a four-week period in early 2016, when coalition warships stopped three dhows, traditional ships that ferry cargo in the Persian Gulf. The dhows carried thousands of Kalashnikov assault rifles as well as sniper rifles, machine guns, rocket-propelled grenade launchers, anti-tank missiles and other weapons.

The group has also said drones used by the Houthis to crash into Patriot missile batteries in Saudi Arabia share “near-identical design and construction characteristics” of Iranian drones.

The weapons transfers also allegedly include ballistic missile technology. The United Nations, Western countries and the Saudi-led coalition fighting in Yemen all say the Houthis’ Burkan or Volcano missile mirrors characteristics of an Iranian Qiam ballistic missile. They say that suggests Tehran either shared the technology or smuggled disassembled missiles to the Houthis who then rebuilt them.

Iran denies sharing missiles with the Houthis, though such a move would fit a pattern followed by the Islamic Republic since its 1980s war with Iraq. Iran largely has avoided direct confrontation with its foreign adversaries, instead relying on proxy groups that it arms through the hard-line Revolutionary Guard’s expeditionary Quds Force or other middlemen.

The latest accusation comes as the Saudi-led coalition faces intense international criticism for its airstrike campaign that has struck hospitals and markets, killing numerous civilians. The UN also says a Saudi-led blockade on Yemen’s ports is “essentially using the threat of starvation as a bargaining tool and an instrument of war” in a country already facing diphtheria and cholera outbreaks while on the verge of famine.

“This has been just a golden opportunity for Iran to have this access and to do it so cheaply and continue to be this thorn in Saudi Arabia’s throat,” said Fatima Abo Alasrar, a senior analyst at the Washington-based Arabia Foundation and a Yemeni national critical of the Houthis. “It’s been a huge win for them.”