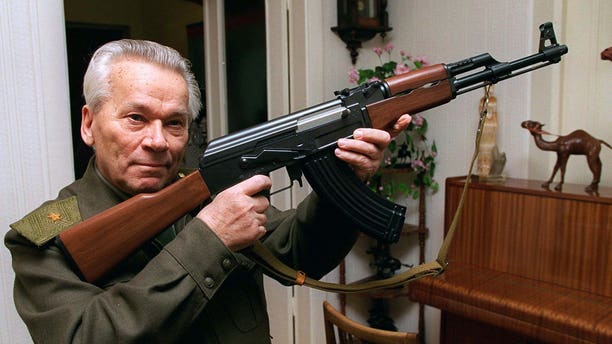 FILE - In this Wednesday, Oct. 29, 1997 file photo Mikhail Kalashnikov shows a model of his world-famous AK-47 assault rifle at home in the Ural Mountain city of Izhevsk, 1000 km (625 miles) east of Moscow. The designer of the world’s most prolific firearm, the AK-47 assault rifle, has written a sorrowful letter to the Russian Orthodox Church’s head, asking if he’s to blame for the deaths of those killed by his creation. According to a Monday, Jan. 13, 2014 report in the daily Izvestia, several months before his death last month at age 94, Kalashnikov wrote to Patriarch Kirill that he keeps asking himself if he’s responsible for those deaths. (AP Photo/Vladimir Vyatkin, File) (The Associated Press)

Mikhail Kalashnikov, the designer of the AK-47 assault rifle, reportedly wrote a regretful letter several months before his death to the head of the Russian Orthodox Church asking if he was to blame for the deaths of those killed by the guns.

The Russian daily Izvestia reported Monday that Kalashnikov, who died last month at 94, wrote to Patriarch Kirill and told him he keeps asking himself if he's responsible.

Izvestia quoted Kirill's spokesman Alexander Volkov as saying the Patriarch sought to comfort Kalashnikov and praised him as a true patriot.

The letter contrasted with past statements by Kalashnikov, who had repeatedly said he created the weapon to protect his country and couldn't be blamed for other people's action.