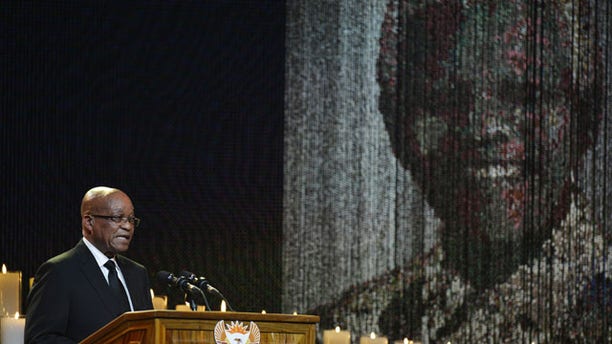 Leaders and family members on Sunday praised South Africa's anti-apartheid icon Nelson Mandela as a man and former president who united and freed his nation by embracing forgiveness and reconciliation.

Below are a selection of quotes from the funeral service in Mandela's southeastern childhood village of Qunu:

"It is the end of an extraordinary journey that began 95 years ago. It is the end of 95 glorious years, of a freedom fighter, a dedicated and humble servant of the people of South Africa. Fountain of wisdom, a pillar of strength, and a beacon of hope for all those fighting for a just and equitable world order," said South African President Jacob Zuma. "Your long walk to freedom has ended in a physical sense," he said in reference to the title of Mandela's autobiography. "Our own journey continues. We have to continue working to build the kind of society you worked tirelessly to construct. ... South Africa will continue to rise."

"Your abundant reserves of love, simplicity, honesty, service, humility, care, courage, foresight, patience, tolerance, equality, justice continually serve as a source of enormous strength to many millions of people in South Africa and the world," said Ahmed Kathrada, who was imprisoned on Robben Island with Mandela for years. "Today mingled with our grief is the enormous pride that one of our own has during his lifetime and  now in your death united the people of South Africa and the entire world on a scale never before experienced in history."

"Go well Madiba . go well to the land of our ancestors, you have ran your race," said Mandela's granddaughter Nandi Mandela using his clan name. "We will carry lessons you taught us throughout our lives ... As South Africans we must stop pointing fingers, but must rather lead by example, as you did and do something positive for South Africa."

"The Madiba song may have ended, but its melody lingers on," said family friend Bantu Holomisa.

He "gave his life for the sake of justice and freedom, who lived the world healing practices of forgiveness and inclusivity, compassion and integrity," said Bishop Don Dabula. "We praise and thank you, oh God, for that Nelson Mandela, for his faithfulness to your call, his example of justice, peace and reconciliation and his courage to endure suffering, rejection and persecution for the sake of others."