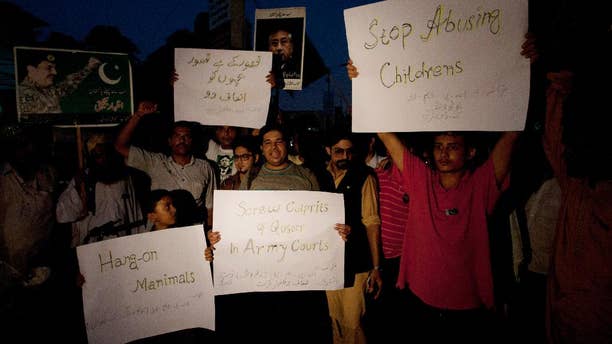 Activists from Pakistan's civil society hold placards to condemn a child abuse scandal, while holding a rally in Karachi, Pakistan, Tuesday, Aug. 11, 2015. In the Pakistani town of Hussain Khan Wala, near the border with India, families kept quiet for years about the blackmail gang that locals believe filmed some 270 children being sexually abused, fearful the videos could appear online or sold in markets for as little as 50 cents. The placard at upper left reads in Urdu, "Give justice to innocent children." (AP Photo/Shakil Adil) (The Associated Press)

A top government official in eastern Pakistan says he has fired a provincial intelligence chief and three senior police officers for failing to act against a gang that blackmailed the families of children it sexually abused.

Shahbaz Sharif, the chief minister of Punjab province, made the announcement late Tuesday on social media. It comes amid widening outrage over the child sex abuse scandal, which locals say involves more than 270 children.

Sharif said he had dispatched the province's police chief to ensure that "investigation is carried out without discrimination and local influence."

Sharif is the brother of Pakistani Prime Minister Nawaz Sharif. A lawyer for victims has accused local politicians and police of allowing the gang to operate for years, something authorities have denied.