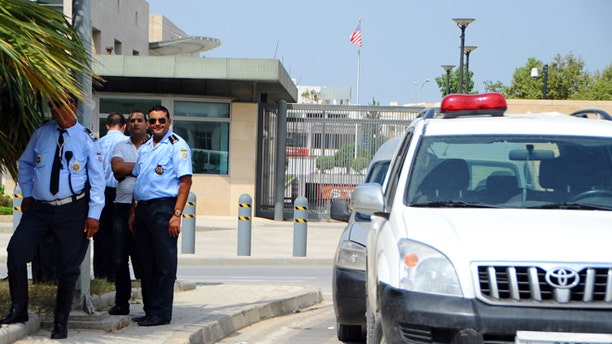 Sept. 12, 2012: Police officers guard the United States embassy in Tunis, as ultraconservative Muslims demonstrate outside the embassy to demand the closure of the embassy and the departure of the ambassador. (AP)

About 50 protesters burned American flags outside the U.S. Embassy in Tunisia's capital as part of widespread anger across the Muslim world about a film ridiculing Islam's Prophet Muhammad.

An Associated Press photographer present Wednesday witnessed demonstrators burning and trampling a number of American flags. Protesters were kept back from the embassy by reinforced security.

A small number of women wearing the Islamic niqab, or full-face veil, were among the crowd Wednesday.

In Libya, the U.S. ambassador and three other Americans were killed when a mob of protesters and gunmen overwhelmed the U.S. Consulate in Benghazi.