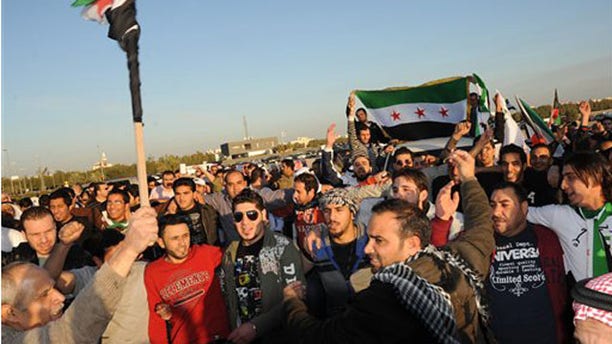 Feb. 4, 2012: Kuwaiti citizens and Syrians resident in Kuwait protest in front of the Syrian Embassy in Mishref, Kuwait City. (AP)

Protesters attacked seven Syrian embassies around the world following reports of the bloodiest episode yet in Damascus' nearly yearlong crackdown on dissent. Mobs trashed diplomats' offices from London to Australia and set the embassy in Cairo on fire.

Activists say Syrian forces killed more than 200 people in the city of Homs before dawn Saturday, pounding restive neighborhoods with mortars and artillery. The government denies the reports.

Australian police said the mob smashed into the embassy in a diplomatic precinct of Canberra, the capital, on Saturday night, causing extensive damage to the ground floor of the two-story building.

Syrian Charge d'Affaires Jawdat Ali told the Associated Press that 50 men smashed through the front door, destroyed furniture and stole computers. He said the damage bill had yet to be calculated.

Ali blamed media reports of the conflict in Syria for inciting what he described as a "barbarian action" and "terrorism."

Protesters also broke into the Syrian Embassy in London on Saturday. British police used batons to beat them back in a second attempt. A total of 12 protesters were arrested.

A similar scene played out in Athens, where police said 13 people were detained after forcing their way into the Syrian Embassy before dawn Saturday. In Germany, 20 people forced their way into Syria's Embassy in Berlin on Friday and damaged offices there, police said.

Syrian protesters in Cairo set part of the embassy on fire Friday night, while protesters in Kuwait broke windows at the embassy and hoisted the opposition flag. The Kuwait news agency said a number of security personnel were hurt in scuffles. Some 300 Syrian exiles and Libyan supporters also occupied the Syrian Embassy in Tripoli and hung the Syrian opposition's flag on the gate.

There were also protesters at Syria's embassy in Tunisia, which decided to expel Syria's ambassador and end its recognition of President Bashar Assad's regime in response to what it called a "bloody massacre" in Homs.

Syria's government has called news reports about the Homs attack part of a "hysterical campaign" of incitement by armed groups against Syria, meant to be exploited as the U.N. Security Council voted on a draft resolution backing an Arab call for Assad to give up power. Russia and China vetoed the resolution despite last-minute negotiations.

In Canberra, a shattered door, broken picture frames and light fixtures, and smashed potted plants were stacked or lay strewn outside the rented embassy on Sunday. Smashed windows had been temporarily repaired with plastic sheeting. The embassy's brass name plaque had been ripped from a wall and lay twisted on the lawn.

Ali said there were two embassy employees in the building at the time, but they were neither harmed nor threatened. Ten Network television news reported that they hid in the basement.

The mob fled before police arrived, and there had been no arrests by Sunday.

"Such behavior has no place in Australia," Rudd said in a statement.

Rudd also said he was "appalled" that Russia and China had vetoed the U.N. Security Council resolution aimed at ending Syria's bloodshed.