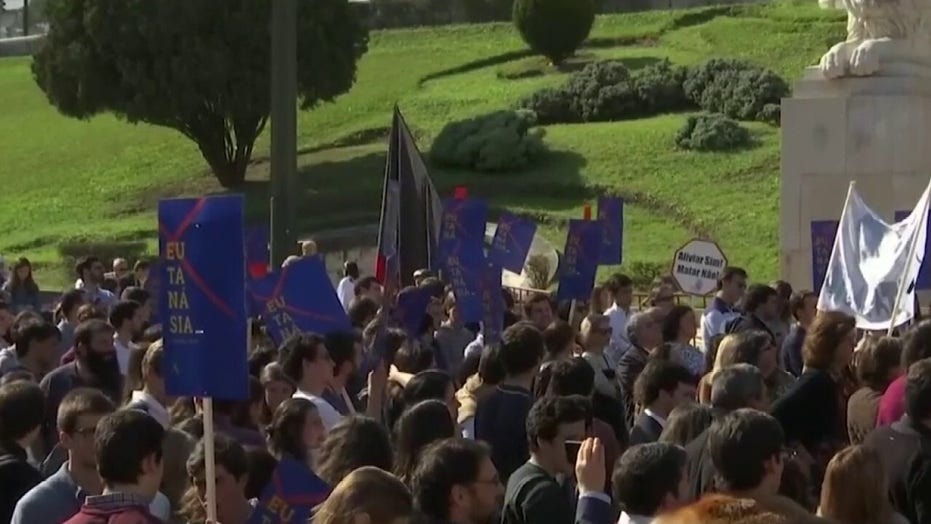 Portuguese lawmakers voted Thursday to legalize euthanasia and physician-assisted suicide for terminally ill people amid protests outside the parliament building.

The vote may add Portugal to the short list of countries that allow such practices, though the country’s conservative president could veto the legislation, sending it back to parliament.

Lawmakers in the 230-seat parliament stated their vote one by one on a series of five proposals -- instead of voting electronically -- a method only used for landmark legislation. Each bill passed by a margin of 28 and 41 votes.

In a similar debate two years ago, lawmakers rejected euthanasia by two votes.

Euthanasia — when a doctor directly administers fatal drugs to a patient — is legal in Belgium, Canada, Colombia, Luxembourg, the Netherlands and Switzerland. Physician-assisted suicide — where patients administer the lethal drug themselves, under medical supervision — is allowed in a number of U.S. states.

All five bills require that a qualifying patient be over 18 years and not suffering from a mental illness, as well as suffering from “unbearable” pain “without a hope for a cure.”

A Socialist lawmaker called those against euthanasia and physician-assisted suicide “radical” during debates.

“Everyone can be the architect of their own destiny, as long they don’t harm others,” Moreira said during the debate.

Meanwhile, the Catholic Church has led opposition efforts. Church leaders have urged lawmakers to hold a referendum on the issue.

Telmo Correia, a lawmaker from the conservative Popular Party, described euthanasia as “a sinister step backward for civilization.” He noted that none of the parties presenting the legalization proposals had mentioned euthanasia as a campaign platform in last October’s general election.

In order to be approved for the process, two doctors, at least one of which specializes in the relevant illness, and one psychiatrist must sign off on a patient’s request to die. The case would then go to a Verification and Evaluation Committee, which could approve or turn down the procedure.

The process is postponed if it is legally challenged or if the patient loses consciousness, and health practitioners can refuse to perform the procedure on moral grounds. Oversight is provided by the General-Inspectorate for Health.

To discourage people from traveling to Portugal to end their life, the bills all stipulate that patients must either be Portuguese citizens or legal residents.