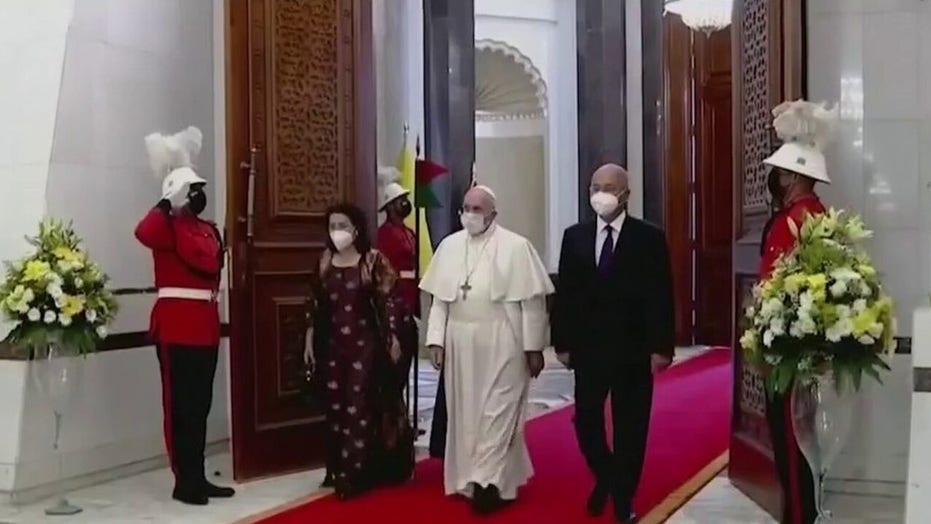 QARAQOSH, Iraq (AP) – Pope Francis called on Iraq's Christians to forgive the injustices committed against them by Muslim extremists and to rebuild as he visited the wrecked shells of churches and met ecstatic crowds in the community's historic heartland, which was nearly erased by the Islamic State group's horrific reign.

At each stop in northern Iraq, the remnants of its Christian population turned out, jubilant, ululating, decked out in colorful dress, though heavy security prevented Francis from plunging into the crowd as he would normally do. Nonetheless, they seemed simply overjoyed that they had not been forgotten.

It was a sign of the desperation for support among an ancient community uncertain whether it can hold on. Traditionally Christian towns dotting the Nineveh Plains of the north were emptied as Christians — as well as many Muslims — fled the Islamic State group's onslaught in 2014. Only a few have returned to their homes since the defeat of IS in Iraq declared four years ago, and the rest remain scattered elsewhere in Iraq or abroad.

Bells rang out in the town of Qaraqosh as the pope arrived. Speaking to a packed Church of the Immaculate Conception, Francis said "forgiveness" is a key word for Christians.

"The road to a full recovery may still be long, but I ask you, please, not to grow discouraged. What is needed is the ability to forgive, but also the courage not to give up." The Qaraqosh church has been extensively renovated after being vandalized by IS militants during their takeover of the town,  making it a symbol of recovery efforts.
For the Vatican, the continued presence of Christians in Iraq is vital to keeping alive faith communities that have existed here since the time of Christ. The population has dwindled from around 1.5 million before the 2003 U.S.-led invasion that plunged the country into chaos to just a few hundred thousand today.

Francis's visit to Iraq, which was on its last day Sunday, aimed to encourage them to stay and help rebuild the country and restore what he called its "intricately designed carpet" of faith and ethnic groups.

In striking images earlier Sunday, Francis, dressed in white, took to a red carpet stage in a square in the north's main city, Mosul, surrounded by the grey hollowed-out shells of four churches, nearly destroyed in the war to oust the Islamic State group from the city.

It was a scene that would have been unimaginable years earlier. Mosul, Iraq's second largest city, was at the heart of the IS so-called "caliphate" and witnessed the worst of the group's rule inflicted on Muslims, Christians and others, including beheadings and mass killings.

"How cruel it is that this country, the cradle of civilization, should have been afflicted by so barbarous a blow," Francis said, "with ancient places of worship destroyed and many thousands of people – Muslims, Christians, Yazidis — who were cruelly annihilated by terrorism — and others forcibly displaced or killed."

Children give Pope Francis, center, flowers as he arrives at Irbil International Airport, Iraq, Sunday, March 7, 2021. Francis is urging Iraq’s long-suffering Christians to forgive the injustices committed against them by Muslim extremists. He asks them to persevere to rebuild the country after years of war and sectarian conflicts. (AP Photo/Hadi Mizban) ((AP Photo/Hadi Mizban))

He deviated from his prepared speech to address the plight of Iraq's Yazidi minority, which was subjected to mass killings, abductions and sexual slavery at the hands of IS.

The square where he spoke is home to four different churches — Syriac Catholic, Armenian-Orthodox, Syriac Orthodox and Chaldean — each left in ruins.

IS inflicted atrocities against all communities, including Muslims, during its three-year rule across much of northern and western Iraq. But the Christian minority was hit especially hard. The militants forced them to choose among conversion, death or the payment of a special tax for non-Muslims. Thousands fled, leaving behind homes and churches that were destroyed or commandeered by the extremists.

Mosul, Iraq's second largest city, became IS's bureaucratic and financial backbone. It was from Mosul's al-Nuri mosque that then-IS leader Abu Bakr al-Baghdadi made his only public appearance when he gave a Friday sermon calling on all Muslims to follow him as "caliph."

It took a ferocious nine-month battle to finally free the city in July 2017, during which between 9,000 and 11,000 civilians were killed, according to an AP investigation at the time. Al-Baghdadi was killed in a U.S. raid in Syria in 2019. The war left a swath of destruction across Mosul and the north, and many Iraqis have been left on their own to rebuild amid a years-long financial crisis.

The Rev. Raed Kallo, was among the few Christians who returned to Mosul after IS was defeated. "My Muslim brothers received me after the liberation of the city with great hospitality and love," he said on stage before the pontiff.

Before IS, he had a parish of 500 Christian family. Most emigrated abroad, and now only 70 families remain, he said. "But today I live among 2 million Muslims who call me their Father Raed," he said.

Gutayba Aagha, the Muslim head of the Independent Social and Cultural Council for the Families of Mosul, encouraged other Christians to return.

"In the name of the council I invite all our Christian brothers to return to this, their city, their properties and their businesses."

Throughout his four-day visit, Francis has delivered a message of interreligious tolerance and fraternity to Muslim leaders, including in an historic meeting Saturday with Iraq's top Shiite cleric, Grand Ayatollah Ali al-Sistani.

At Qaraqosh, Francis urged its residents to continue to dream, and forgive.

"Forgiveness is necessary to remain in love, to remain Christian," he said.

He spoke after a Qaraqosh resident, Doha Sabah Abdallah, told him how her son and two other young people had been killed in a mortar strike Aug. 6, 2014 as IS was nearing the city. Their death was the alarm for the rest of the residents to flee.

"The martyrdom of these three angels was a clear warning: if it weren't for them, the people of Baghdede would have remained, and would have inevitably fallen into the hands of ISIS," referring to the name of Qaraqosh used by residents. "The deaths of three saved the entire city."

She said now it was for the survivors to "try to forgive the aggressor."

Before leaving Qaraqosh, the pontiff signed a book of honor, writing, "From this Church, destroyed and rebuilt, a symbol of the hope of Qaraqosh and of all Iraq, I ask of God, through the intercession of the Virgin Mary, the gift of peace."

Francis wraps up the day with a Mass in the stadium in Irbil, in the semi-autonomous northern Kurdish region, that is expected to draw as many as 10,000 people. He arrived in Irbil early Sunday, where he was greeted by children in traditional dress and one outfitted as a pope.

Public health experts had expressed concerns ahead of the trip that large gatherings could serve as superspreader events for the coronavirus in a country suffering from a worsening outbreak where few have been vaccinated.

The Vatican has said it is taking precautions, including holding the Mass outdoors in a stadium that will only be partially filled. But throughout the visit, crowds have gathered in close proximity, with many people not wearing masks. The pope and members of his delegation have been vaccinated but most Iraqis have not.