Pope Francis has been outspoken on sex, love, politics, money and other troublesome topics 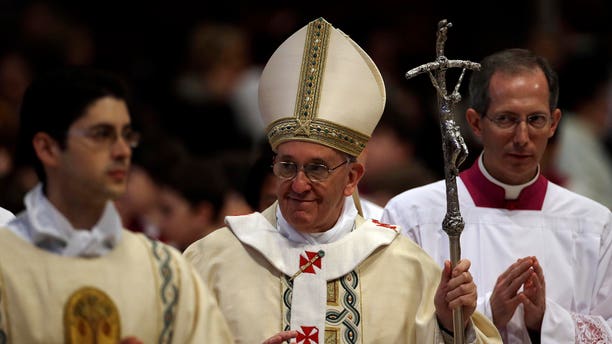 Pope Francis leaves at the end of a mass where he ordained ten new priests in St. Peter's Basilica at the Vatican, Sunday, April 21, 2013. (AP Photo/Gregorio Borgia) (The Associated Press)

Before he became pope, Francis spoke his mind about many of the most sensitive topics the Roman Catholic church faces today. Here is a sampling from "On Heaven and Earth," published in 2012, and his authorized biography "The Jesuit," published in 2010 and republished last month as "Pope Francis. Conversations with Jorge Mario Bergoglio."

"For the moment I'm in favor of maintaining celibacy, with its pros and cons, because there have been 10 centuries of good experiences rather than failures. It's a question of discipline, not of faith. It could change."

"We must never turn a blind eye. ... I do not believe in taking positions that uphold a certain corporate spirit to avoid damaging the image of the institution. That solution was proposed once in the United States: they proposed switching the priests to a different parish. It is a stupid idea; that way, the priest just takes the problem with him wherever he goes."

ABORTION: Francis is against it, from the moment of conception.

"The pregnant woman doesn't carry a toothbrush in her womb, nor a tumor. Science teaches that from the moment of conception, the new being has all the genetic code. It's impressive. It's not, therefore, a religious question but clearly a moral one, based on science."

SEX EDUCATION: Francis is for it, if done holistically, with love and not just sex in mind.

"I think it should be done throughout the growth of children, adapted to each phase. ... What happens now is many of those who raise the banner of sex education understand it as separate from the person's humanity. So, instead of counting on a sexual education law for the entire person, for love, it's reduced to a law for sex."

CONTRACEPTION: Francis thinks many Catholics are too obsessed about it.

"I see in certain illustrious elite Christians a degradation of what's religious. ... they prefer to talk of sexual morality, of everything that has anything to do with sex. That in this case you can do it, that in the other you can't. ... We've left aside an incredibly rich catechism, the mysteries of faith and belief, and end up centering on whether or not to march against a proposed condom law."

"It's a very strong value in Catholicism, marriage until separated by death. Still, today in Catholic doctrine the faithful who get divorced and remarry are reminded that they are not excommunicated. While they live in a situation on the margin of the sacrament of marriage, they are asked to integrate in the life of the parish."

Gay marriage is "an anthropological step backward. If there's a private union, then third parties and society aren't affected. But if they're granted marriage rights and can adopt, there could be children affected. Every person needs a masculine father and a feminine mother to help them settle their identity."

ORDINATION OF WOMEN: Francis is against it, but says women have a maternal role vital to society.

"If they're not part of it, a religious community doesn't only transform itself into a macho society, but also an austere one, hard and poorly respected. The fact that a woman can't be a priest doesn't mean they are lesser than the male. It's more — in our conception, the Virgin Mary is above the apostles."

FEMINISM: Francis has issues with it.

"A philosophy of constant feminism doesn't give the woman the dignity she deserves. ... It runs the risk of becoming machismo in skirts."

Medicine should not "focus so much on whether someone lives three days more or two months more, but on assuring that the organism suffers as little as possible. One is not obligated to preserve life through extraordinary measures. This can go against the dignity of the person. Active euthanasia is something else — that's killing."

DEATH PENALTY: Catholicism was once thought to tolerate it. Francis says it's never OK.

"Life is something so sacred that not even a terrible crime justifies the death penalty."

FUNDAMENTALISM: Francis says it warps and weakens the faithful.

"The teacher who is so arrogant as to make decisions for the disciple is not a good priest, he's a good dictator, an eraser of the religious personalities of others ... this kind of religiosity, so rigid, wraps itself in doctrines that pretend to provide justifications, but in reality they deny liberty and don't allow people to grow."