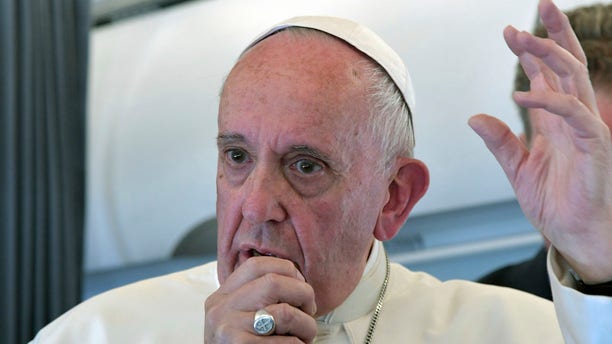 Pope Francis addresses journalists during the traditional press conference on his flight back to Rome, following a two-day visit at Fatima, Portugal, Saturday, May 13, 2017. (AP)

Pope Francis acknowledged Saturday that the Vatican has a 2,000-case backlog in processing clerical sex abuse cases and says criticism of the slow pace was justified. But he says more staff are being added and insists the Vatican is "on the right path."

Francis was making his first comments about the criticism leveled at the Vatican's handling of sex abuse cases by Marie Collins, an Irish abuse survivor who resigned from Francis' sex abuse advisory commission in March. Collins quit because of what she said was the "unacceptable" level of resistance within the Vatican to implementing the group's proposals to better care for victims and protect children from priests who rape and molest them.

Speaking to reporters while flying home Saturday from a trip to Portugal, Francis called Collins "a great woman" and said she was "a bit right" to complain about the slow pace in processing cases.

"Marie Collins was right on that point. But we are on the right path, as there were 2,000 cases backlogged," he said.

Francis didn't respond to the other issues raised by Collins, including the refusal of the Congregation for the Doctrine of the Faith — which handles abuse cases — to create a tribunal to judge bishops who covered up for pedophile priests. Instead, he focused on explaining why cases can take so long to process.

To improve efficiency, he said he had added more staff to the congregation and that talks were underway about providing more regional help to bishops to ensure their cases are properly documented before they arrive at the Vatican for review.

He denied he had ever agreed to a request for clemency from a pedophile priest, saying once a sentence is confirmed on appeal by the congregation "it is finished."

Francis has come under fire from some survivors and their advocates for his handling of the abuse crisis.

He won praise for having created the advisory commission and for promising "zero tolerance" for abuse. But his advisory board has lost credibility following Collins' departure and its failure to implement key recommendations that even Francis had approved.