Pope Francis receives a gift from a journalist during his flight from Abu Dhabi to Rome, Tuesday, Feb. 5, 2019. Pope Francis has concluded his historic visit to the Arabian Peninsula with the first-ever papal Mass in the birthplace of Islam. (Luca Zennaro/Pool Photo via AP)

Pope Francis faced calls for resignation last year after a tepid response to rampant Catholic sexual abuse of minors, amid a cover-up that reportedly "went all the way to the Vatican."

Francis may have reignited those calls with his admission Tuesday to reporters that he is aware of the scandal of priests and bishops sexually abusing nuns. It's the first time the Holy Father has said anything publicly about it, adding that he is committed to doing more to fight the problem.

"Should we do something more? Yes," Francis said. "Is there the will? Yes. But it's a path that we have already begun."

Francis spoke to reporters on the heels of celebrating a historic mass in the Arabian Peninsula, the birthplace of Islam, on a flight from Abu Dhabi to Rome. 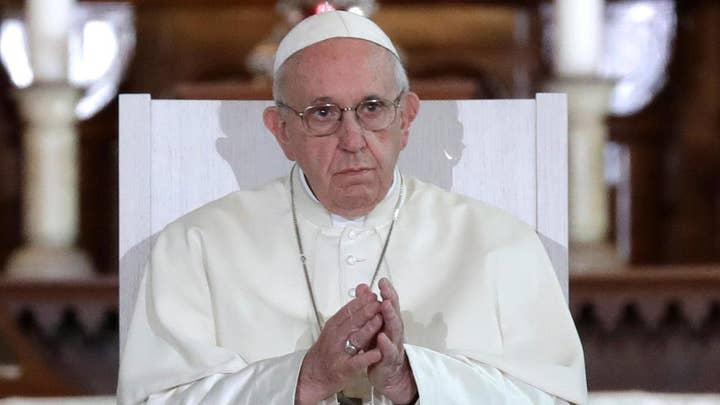 The issue was raised amid the Catholic Church's overarching scandal of the sexual abuse of minors as hundreds of clergy have been identified over the last year with decades-old abuses that have been covered up and the "Me Too" era awareness that women, nuns in this case, can be victims of abuse when there is an imbalance of power in the relationship.

Francis pointed out that his predecessor Pope Benedict XVI took action against a French order when some of its religious sisters were reduced to "sexual slavery" at the hands of priests or their founder.

Last year in a statement from the Vatican, the Holy See spokesman said to victims of child abuse "the pope is on their side."